It's all about the Numbers

Over the last few months most of the development team at the OU have been concentrating on activities related to getting Moodle 2 up and running here - and particularly in migrating the OU developed components and plug-ins for Moodle so that both we and others can use these in Moodle 2 as it gets deployed.

Our intention at the moment is to start using Moodle 2 with a small number of students this summer, and to gradually move all OU courses across to Moodle 2 over the following 12 months.  One of the issues for us is around having confidence in the ability of the new Moodle installation to cope with the sheer volume of traffic that our current Moodle 1.9 installation carries, so I thought it might be interesting say a bit about our monitoring of Moodle and the volume of traffic we're handling at the moment.

We have two almost-real-time systems monitoring the VLE.

There is a dashboard report on the VLE which lets us see the activity level over last 5 minutes, last 60 minutes and last 24 hours.  We can see how many users are on the system, and also get a indication of which parts of the system they are using. 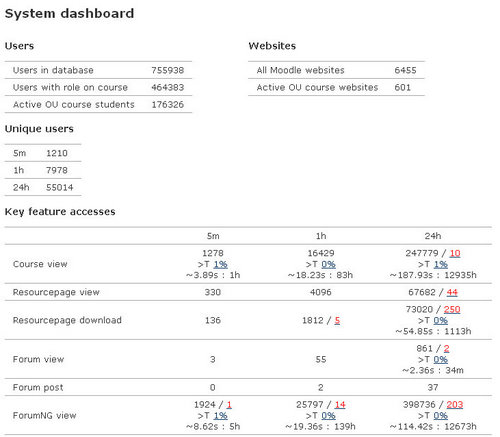 Alongside this we feed VLE transaction information out of the VLE to a centralised OU monitoring system which lets us see how traffic varies over the day.  The curve below is a fairly typical weekday curve showing our traffic climbing gradually through the morning to our day-time plateau (with a little peak at lunchtime) before a tea-time dip and then the evening peak. 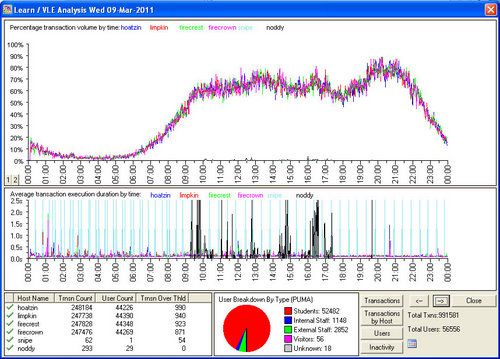 So what are these tools telling us?

Firstly, the OU VLE is busy and has been getting dramatically busier over the last 18 months.

The next question is, what are the users doing while they're using the VLE?  The short answer is talking to each other via the forums - over the last 15 months we've seen the number of forum posts created each month climb from around 14,000 to close to 500,000.  Again the curve shows the same shape but climbs even more dramatically than the transaction numbers.

Now we know both the scale and the type of traffic that we can expect from our users, we need to ensure that our Moodle 2 installation can cope with this.  Hopefully I'll be able to post again in a few weeks to let you know.