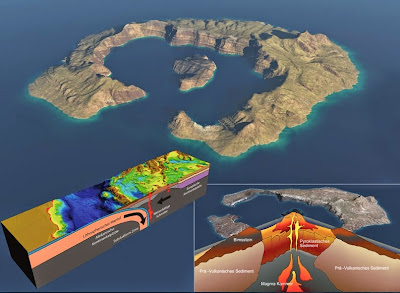 Four years of studying learning at Masters level and have I got the motivator down to one three letter word? Why?

'Why' feeds the curiosity and evolves into an interest, understanding and love - even an obsession. Do you want to know more? Do you keep asking why?

As it was cheaper to fly out to Santorini for six days then two or three (accommodation provided) I find myself out and about. Thus far I have done what I call 'the Google-car' trip around the 70 square kilometres of the island: I've turned down every alley and lane to see where it takes me. This included what I'd describe as a couple of 'lobster pot' twitten-like walled alleys, as well as a 2 mile dirt track that came out at that rare find - the secluded beach with a ramshackle cafe/bar and a handful of sun-loungers. This is a spot I've been back to already to escape the tourist crowds along the cliff-top thorough-fares of Oia and the beach at Kamari.

Questions started at dusk yesterday when I decided to walk down to, around then scrambled onto what my older sister insists on call 'The Tit'  (Cape Skaros). We are staying in a B&B just the other side of 'the view' costing for one week what people 100 yards away pay per night!! (Hotel Casa Bianca).

Most of the rock on the island(s) is volcanic and of several different types. There are layers like a trifle. The search in Google for 'Santorini Geology' leads me to several articles of increasing levels of sophistication. I'm now downloading a paper from the OU Library which will push my capacity to understand and thus lead to the references, further questions, perhaps a forum and certainly some basic texts on geology and vulcanology. GPS tags all over the island have shown that it is pitching off the horizontal all over the place. They suggestion that tens of millions of liquid magma are entering the chamber below which suggests one of two kind of events: the minor earthquake and emissions of poisonous gasses and perhaps lava (last time 1956?) or, less likely, the 10,000 to 35,000 year event which last occurred between around 1600 BC which had a catastrophic regional if not global impact.

The other curiosities that got my attention was a museum of Greek bagpipes or 'tsabouna'.

More like the Northumbrian pipers. The curator of the tiny remains of a 13th century Venetian castle demonstrates some ten of the instruments from the collection in regular concerts. I had another of a taster to want to go back.

And the pre-Minoan archaelogy. Not quite Pompaie but remains of those from the island some 3,600 years ago.

Is a module on intermediate French the right one for me? Maybe it should be geology.