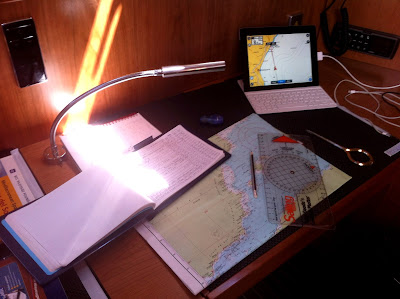 First time to log and chart any off-shore trip

First time to have the helm on a four hour night-time shift: just me, the full moon, the occasional visit by dolphins and 'ghost' ships that appeared, off radar, without any night-time navigation lights on.

First time to speak Spanish and be understood - even it was only asking for a one-way ticket at the bus station.

First time plotting a course and keeping the log.

First time sleeping overnight in an airport - the flight out went too early for the trains and taking a taxi negated getting a cheap flight.

First time to see the straights of Gibraltar - staggered by the narrow gap between Europe and Africa.

First time to be seasick: hideous, only lasted a few hours thankfully.

Never more than four hours sleep in a row since last Friday.

I read a book cover to cover on the flight out (including departure lounge) 'Close to the Wind' by Jon Waters, someone else who did a university course in creative writing and is now being published. It's taken five years.

First time to use GPS system on a boat that not only plots your exact position, but identifies other boats in the same detail: size, speed across water, destination, bearing and so on.