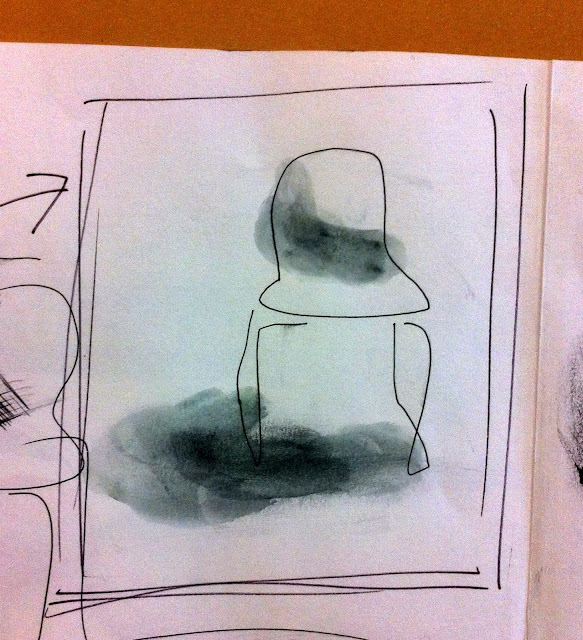 It was like being back at school: though the ratio of 15 women to 3 men felt like I'd gatecrashed the girl school's class down the road; I was educated in all male schools from 4 to 19. Of the 15 two were under 20, two were under 30 and the others above 60 and 70. No difference. Just like school. I recognised this swimming with Masters that given any opportunity to be the child that we were we are.

My relationship with art is an odd one: a mother who taught art, had an MA from Durham University in Fine Art, but who discounted at as a career for any of her children. I took it as far as A'levels (under her tutelage).

In 90 minutes we has some history, so thoughts on kit, then we got on with it. I found a secluded spot in the central courtyard (Jerwood Gallery, Hastings). And picked first on the climbing plants on a wall, and then the chair I'd taken out of the class. My challenge was to look at different ways of adding shade. Eventually I found that changing from pen to cotton balls and ink would differentiate between the object and the shadow. This'll take further work.

Other learning opportunities over the last few days have included:

It is eight or more years since I did the course and seven years since I've been in a power boat. A bit of it came back. And new stuff was added. I need this so that I can operate a 'rib' during 'racing week' at the local sailing club: laying the course, keeping an eye on the fleet to rescue and assist. The sea can be choppy, the winds strong. Dinghies go over and their mast can pin them to the shallow sand and grit of Seaford Bay.

How to train a pigeon

In her wisdom my daughter has rescued a pigeon with a broken wing. The RSPB and animal sanctuaries aren't interest. 'Ralph' is now accommodated in a garden shed; shits everywhere but is eating from my daughter's hand. Muggins will be looking after it shortly of course. The volume of pebble-dash shit is impressive as every shit is onto a fresh patch of shed floor - it will be one shit deep, like a carpet by the weekend.

The exhibition on the designer Ivan Chermeoff at the De La Warr is so good I've been back three times. There is no book on this exhibition, though many of his books are nailed to a table to admire (the page it has been opened at), with a few books you can browse. There is an insightful video too - an interview with the designer talking about how he got into fine art and graphic design from an inspiration father. One of the things he talks about is 'learning to see'. Had photography not been banned I would not have got out a pad of paper and looked more closely at his collages. Had I not taken such a close look I wouldn't have seen, with magical surprise, that one was made from ephemera collected at the inauguration of JFKennedy as US President on January 20 1961.