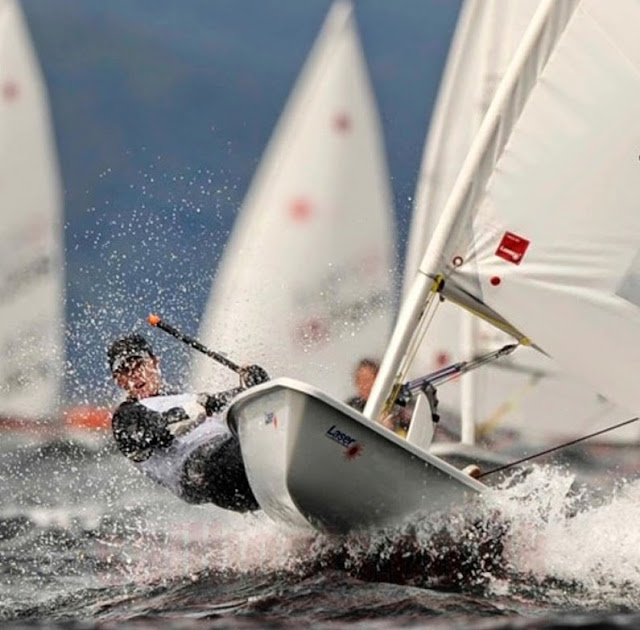 I capsized four times this afternoon. The first I got over the side of the dinghy and righted without getting my feet wet; it is six or seven years since I did this crewing a Fireball. Even in a wetsuit the English Channel is cold enough early in the season. The second time I floundered into the drink and the mast ended up embedded in the mud - I had to be rescued. Ominously I'd been out all of six minutes. Was I up to helming a Laser in a Force 6 with a full sail? It took another 90 minutes before the next dunking; I was tired, cramp in one calf, both thighs shaking. By now I'd just about figured out how to wrestle with the gusting wind. I was also trying to get my hands swapped over effectively on ever tack and to keep my feet from being tied up in the mainsheet. Another hour before the fourth capsize: a propper dunking in which I fell overboard rather than the boat capsizing - I was grinning for ear to ear: still am. Like Tantric Sex? Hours of holding off the inevitable then wosh-bang-wallop. It's the most fun I've had in ages. This sudden burst of enthusiasm for sport delivers on many fronts: exercise, fresh air, thrills, a mental and physical challenge ... a modicum of risk and much more to do and learn before I take to the sea. In 10 days, potentially, I have my first club race. In the sea. With waves and tides and other boats. Unlike the brain, my muscles now need a day at least to recover - I feel like I've been on the rack.