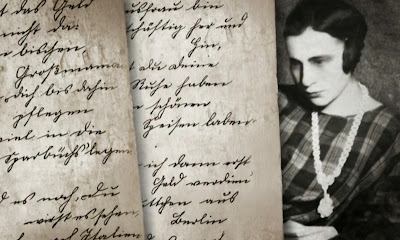 This series, each episode an hour long, features six or so characters per episode, most from episode to episode drawing on their diaries and letters. A lifetime interested in the First World War I am still amazed and thrilled at the stories that are told and the quality of dramatisation. Without any doubt in my mind THIS is the series that our generation will remember in relation to the marking of the centenary of the First World War.

Elfriede Kuhr, featured above, joins us as a 15 year old developing a crush on a German trainee pilot. Born in what is now Poland she went on to marry a Jew and perform in ante-war performances, having to flee Germany in 1933.

Inspired stuff; though the four universities offering free courses sadly offering little that relates directly to any of this series at all. A lost opportunity. There is a need for a module on the First World War, not niche parts of it, nor a one hundred year sweep from the 1860s to 1960s.

This stunning production, with the highest production values and a budget to match will see many of the actors appearing in movies and TV, with the director surely moving on to Hollywood.