Here we go then, again 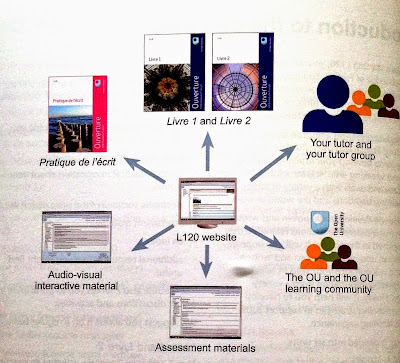 A modest package of three text books arrived this morning. I'm starting Ouverture:Intermediate French. No more DVDs (or VHS cassettes) - that's all online. With trepidation therefore I look ahead to the new academic year and a BA module in French. The idea is to complete the task I ought to have undertaken 22 if not 37 years ago ... dreadful at school French I still did an exchange and have worked in France on and off. Getting a 'proper job' in the early 1990s I ought to have done a course and brought my written French up to scratch. I never did and not surprisingly my work prospects were limited. 'It's never too late' my wife says, not realising what I am about to embark on. Hopefully I'll come away both reading, writing and speaking French rather better. I may yet get to apply it longer term if I end up back in France working later this year.

From a distance learning point of view, and having had six out of seven modules over the last four+ years almost entirely online with little in the post but an EMA grade and assessment it does already feel, in a tiny way, that there is a modicum of direct contact. Though familiar with the online platform and having studied 'Personal Learning Environments' it is valuable to see it applied, and spelled out in book form.

I'd be unlikely to get porridge on a computer screen though. Flicking through the pages over breakfast I got porridge on page 2. Over the next year there might be many more spillages as I get through this stuff.

Scary? Yes. It took me twenty years to get my written English to a reasonable standard. I struggled with languages at school - spoken fine, I'm a good mimic and enjoyed 'immersive learning' when staying with a French family and later hitching around France in my teens with other French teenagers. Written French? Ouch.

I know from experience that at some stage the fog of incomprehension clears: that a language can become second nature and therefore fluent. Why? I guess I love France and it's easier to try and fix a language I know rather than learning a new language, such as Spanish, from scratch.

Next up, and complementing this, I have some history books on the First World War to read in French. Also applying to a number of opportunities in France. In a few months time I may be doing 'L'Ouverture' from France itself ... though working too hard to manage this?

Good Luck, Jonathan.  (Or should that be Bon Chance?).  x

Bon chance, je crois. Et voila, ca commence ... learning new tricks on the keyboard will be a pain, and resisting the temptation of using Google Docs ... oh, and asking my bilingual wife!!! From whom I am trying to keep this little enterprise a secret