Dying wasn't what bothered them, so much as how they might die 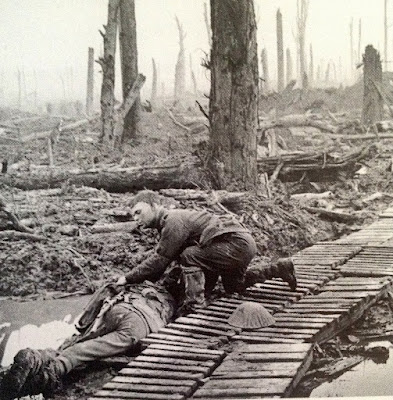 'A man left the front line wounded slightly at dusk on 12th and on the morning of the 13th was discovered stuck fast in a shell hole a few yards from where he started. Repeated efforts were made to get him out with spades, ropes etc: At one time 16 men were working at once under enemy fire. But he had to be left there when the Battalion was relieved on the night of 13th/14th'.

Such stories were common place during 'Third Ypres' or 'Passchendaele' July-November 1917. They'd then suffer the further ignomony of being recorded as 'missing in action' and as their body would never be found listed on the walls of the Tyne Cot memorial or at best placed in a grave marked 'Known only to God'.

It's become the inspiration for a science fiction story.