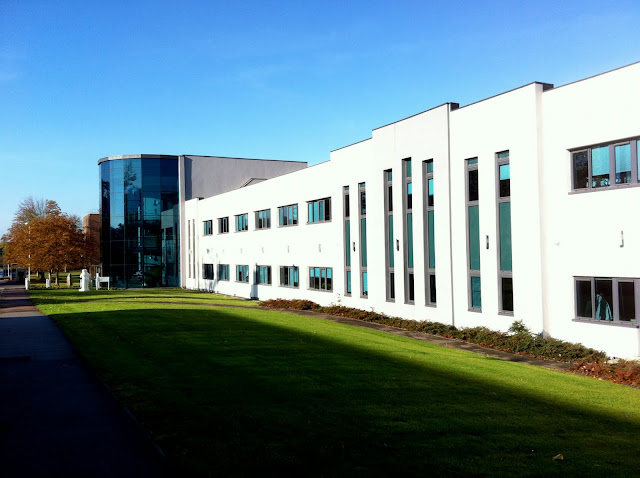 Three weeks ago I entered the OU Campus for the first time.

There was no fanfare but I heard the OU signature tune. That 'ear worm' may take a while to extract.

I'm now in the town, ten minutes from the campus, but ostensibly in the country. Milton Keynes defies the logic of a city that has grown up organically; MCK has been planted, every 35 acres or so grows a different architect's idea of what a community should be. I think Prince Charles should have been given a shot.

I'm staying in a house with FIVE OU students, all doing Dphils in various departments. I spoke to my wife earlier and said I felt like I'd just joined a team that would be competing in University Challenge (I suppose we could).

With all this brain power in the building I won't have any excuses if I need to discuss an idea; I'm sure they'll have answers. Is that allowed? Suddenly instead of distance learning I'll be learning at close proximity.

MAODE and H800 hasn't been forgotten.

Though I have been without a computer for 48 hours. I got to the point where I felt a desire to keep a journal on paper. Not that I blog like that any more, the obsessive who must post an entry every day. We did that in 2000/2001 to be the first or the first few to do so. I probably got most of three years down then let it drift. Better to write when you have something to say. My ride up the M23 around the M25 and up the M1 at 45mph (roadworks/density of traffic) gave me a chance to get through two chapters of Chris Pegler's book on Blended learning. I set the Kindle to read and wore headphones. The quirkiness of the reader means that I remember best of all the words it found hard to pronounced The intonation was all wrong for repurpose, for example, and Moodle came out like a sneeze.

I listened to Catherine Valente reading her latest book. We met online and blogged constantly to each-other from 2001-2005. Hearing her read gently through her book while glancing at the text from time to time made me wonder if some of the authors of the books we are reading for the MAODE couldn't be persuaded to do the same. It is an engaging way to be taken through the text.