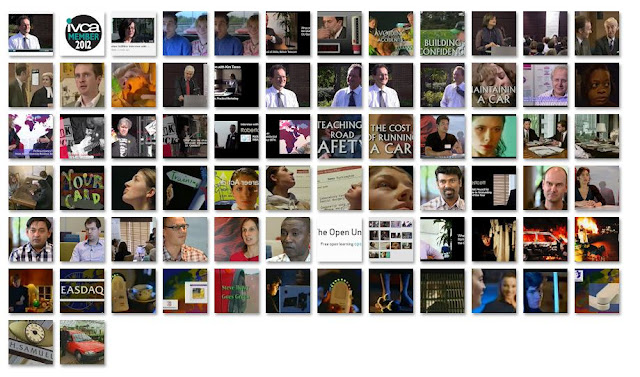 From Wikipedia with commentary.

Aggregated here though shared for the value of thinking about the myriad of ways we now generate content and the way user generated content has value that is different from content produced or published by institutions or corporations.

You see a programme and talk about it at a party. Or you talk about an event which a writer picks up and puts into a novel that is made into a film. Where does the conversational like disembodiment of the idea from a person's head 'find legs' and get a life of its own. How should we use and value all of this 'stuff?' Perhaps in exactly the same way that we differentiate between journalism and scholarly writing, between chat (even if on topic) around the 'water-cooler' compared to a more formal teasing out of ideas in a tutorial.

It all matters, you just have to navigate around the choices with some sense of their different meanings and values.

What I favour about user generated content is how authentic and immediate it is. Think of the footage from smartphone of the Tsunami in Japan this March. The user generated content not only trumped the TV networks, but is already being applied in academic reseach by placing scholars at the point the footage was shot so that further analysis can be undertaken on what happened and the lessons to be learnt.

We live in interesting times.

It entered mainstream usage during 2005 having arisen in web publishing and new media content production circles.

Its use for a wide range of applications, including problem processing, news, gossip and research, reflects the expansion of media production through new technologies that are accessible and affordable to the general public.

In addition to these technologies, user generated content may also employ a combination of open source, free software, and flexible licensing or related agreements to further reduce the barriers to collaboration, skill-building and discovery.

Sometimes UGC can constitute only a portion of a website.

For example on Amazon.com the majority of content is prepared by administrators, but numerous user reviews of the products being sold are submitted by regular users of the site.

Often UGC is partially or totally monitored by website administrators to avoid offensive content or language, copyright infringement issues, or simply to determine if the content posted is relevant to the site's general theme.

Just because you 'generate' stuff doesn't mean it will be permitted. How does a business or institution manage often valuable input from stakeholders? Do you 'cut your face off to spite yourself'by disallowing such stuff? An organisation that shuts down the voices that sing its praises are surely shooting themselves in the foot.

The very nature of the networked, online, switched-on world in which we now leave favours those, like Cisco Systems with its 1300 employee blogs, that embrace what is going on. Indeed, this number of activity would and does quickly drown out the detractors. Use the power of the crowd to police your message, because you never can.

Think of it as having an Open Day every day. People come and go. But the crowds swell. Do you issue edicts then send trained staff off to tell people they can or annot talk about x or y, or talk at all? And if they are going to talk, it can only be in a specific location where everything you say will be recorded, delayed for moderation, and only then shared with a myriad of additional tags attached ot it that are not of your choice. Might this be like talking through a gas-mask.

To fail to engage is to disappear. Institutions will be noticeable for their absence. The advantage the OU has are the numbers of students and alumni. If research suggests that only 1% of those active online blog, then the OU should expect 3,000 to be out there. If we add in alumni groups this figure might rise to 30,000?

(And don't give me the generational thing ... research, take that by Richardson 2003,2005,2007,2011 at the OU knocks that nonsense on the head). IT has nothing to do with when you were born, and everything to do with personality, education, having the kit and making the time.

Here's a thought, if you want to police content who should do so? The publisher, editor or print unions? Does it not have to come down to the audience deciding what they consider acceptable or of interest to them or not?

Just let 'em have it.

There's enough out there for the dross to get lost and enough like-minded people on your side to drown out the miscreants or the negativity as it inevitably, occasionally, occurs.

If someone is proud of who they are and where they work and what they do, let them sing its praises, let them create supportive content. Encourage, enable, even reward and from time to time offer additional resources if they are on a roll and readers are flocking to their banner.