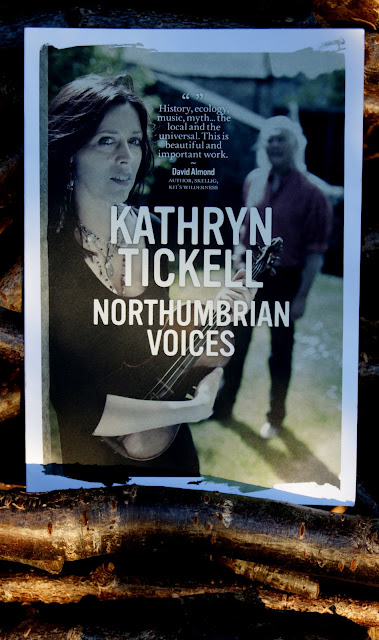 Kathryn Tickell was at The Stables, Milton Keynes last night.

The music was wrapped around the stories of shepherds and farm labourers on the hills of the North Tyne valley. My father's great grandparents and several of my mother's too came off the land above Hexham, from Newton, to Chatton and Alnwick, to find work on Tyneside in the mid to late 19th century.

For a while my father lived in Chollerford, on the North Tyne and I was at school for five years down the road at Newton.

Trips out to Kielder, before and after the reservoir, were common. We often drove into Scotland over the fells via Wooler and Jedburgh.

In the 1920s my grandmother and her sisters would go and stay in Rothbury for the summer.

Northumberland, you could say, has some resonance for me.

I have a book of memoirs from 100 years ago which were brought up to date with stories of dreadful winters in 1963 which I don't remember and of 1979 that I do as I often struggled trying to get from my father's place in the Eden Valley, to my girlfriend in Wylam then home to Gosforth.

Picnic spots, school camping trips, parties in Church Halls and even singing in The Tynedale Festival and in churches in Hexham, Corbridge, Matfen and Alnwick.

Do I hanker after it?

The brackish water, bogs and ferns? a drive along the Military Road below Hadrian's Wall would be enough.

I think K T's great too.  I loved her on the proms.  Lovely reminiscencing Jonathan.  Sounds like you really miss Northumberland

- how about you taking the family for a holiday around some of the lovely places you mentioned?

We do. My sister lives in Gosforth. We have stayed in Kielder and when I am there I head out towards Cragside or Beadnell.

We do. My sister lives in Gosforth. We have stayed in Kielder and when I am there I head out towards Cragside or Beadnell.

That's great Jonathan.  I've been to Gosforth, Keilder and Cragside but not Beadnell.

We had a house in Chollerford on the North Tyne too.

Kathryn Tickell is brilliant. I used to live in Rothbury in the 70's-80's and she used to play in the Traditional Music Festival that is held there. The whole weekend event was marvellous event with singers and musicians coming from all over the country and even from America. The village was just alive with music and there was never any trouble. The only police presence I can remember used to be the local bobby. I even produced a poster one year for the festival when I was developing an interest in calligraphy. I believe the event has become oversized now and very commercialized but it would be interesting to revisit it one of these days. Nice to have something in common with another blogger.

Hi Joyce, You've given me an excuse to head north next time the festival is on. Jonathan