My second Christmas with the OU.

I can't believe I posted something last year, but you never know: this becomes something of a habit, and for me studying at 5.00am is normal. 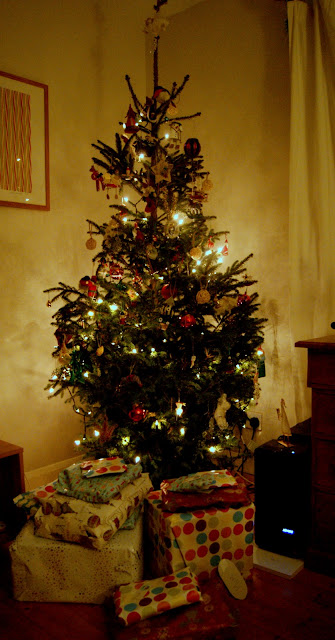 This could well be the first year in the last ten when a child hasn't been up by now! (They are 13 and 15). My son, unusually for him, was up at around 12.30am but realised his mistake and went back to sleep. Mrs Santa Claus had paid a visit by then but I don't recall hearing the midnight munching of chocolate money.

There are some wonderful traditions I've read about here.

I particularly like the idea of putting on new pyjamas on Christmas Eve (present no.1) and also having a 'table present' (the last present). As a child's request we're having a roast ham and for the first time in four years my daughter will have some poached fish (cod) having been vegetarian. I don't think she'll stretch to red meat, or even chicken (just yet). We've not asked for an explanation for this change, but delighted to have something else to offer her.

Happy holidays folks, I've got a Residential School from the 11th Jan and TMA2 in early February so I'll be here most mornings

Yes, that is a computer nudging into the frame there.

I love your tree and decorations

plus carrots for the reindeer

Have a lovely day with your family.

Have a very Happy Christmas!

Seeing your tree makes me realise how daft mine really is!!

Glad you enjoyed the song

Eek! Forgot all about the reindeer though when the children were young we did the total windup with hay, hoof prints, and a half eaten mince pie! happy festivities everyone. I'm in the kitchen and loving it. j

I hope you all enjoy your Christmas day, I am just about to go to the kitchen. Merry Christmas! xx

I got PJs. Next year I'll ask to open them the night before. I also have the Steve Jobs biography which is more about H807 and B822 than you can imagine and was an insightful thought, as always, from my in-laws. We have had a three hour gap before dessert, something of a fluke, I made mulled cider then mixed this into the fruit salad. It works! Christmas tradition used to be the Queen. I'm sure it began with the National Anthem and my grandfather would stand. These days the Christmas day must is Dr. Who.

Glad to see I have inspired you it really is great getting new pJ's on xmas eve, and I don't really know why we do the table present but it just adds a little something to the day. Actually now that I think about it it was not me but my parents who have inspired you, they are the ones who came up with it

Hope you had a wonderful day, I know I did, unfortunatley I now have to go to bed as I have work in the morning LOL