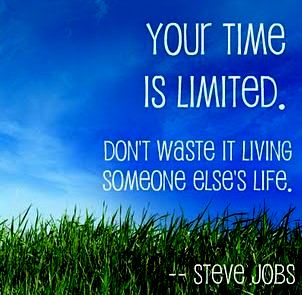 "There's a temptation in our networked age to think that ideas can be developed by email and iChat. That's crazy. Creativity comes from spontaneous meetings, from random disucussions. You run into someone, you ask what they're doing, you say 'Wow,' and soon you're cooking up all sorts of ideas". Steve Jobs after Walter Isaacson (2011:431) on the design of the Pixar building.

I'll be quoting from the Steve jobs biography often as I apply what I have learnt to B822 'Creativity, Innovation and Change', and share what he did for the world with the Apple, with Pixar, with iTunes and the iPad.

Had he got involved in education I have an idea of how he would have approached something.

Steve Jobs was the idea and for behind releasing on iTunes a box-set of EVERYTHING Bob Dylan had ever recorded; this in the Digital Age is the way forward. Even if I cannot read everything on a subject, I want it aggregated for me nontheless. I want every article or book reference in a book such as this biography, with links to every interview too.

...and wouldn't it be great to have such an innovative and creative approach for our children?

...as a Headteacher in my previous life, our philosophy was for our children to be Historians, Scientists etc rather than 'do' history.....we tried to make it a creative approach and we were constantly justifying our approach, yet the children were fantastic and the 'results' through the roof and in a 'very poor area'. Education is scared of innovation

...are you doing your masters or a phd?

Steve Jobs was an awkward, pernickity sod who demanded excellence and would shift radically from thinking an idea 'shit' or 'brilliant' over night (basically he struggled if the idea wasn't his own.

A room, or a business of thousands with more than one Steve Jobs was never possible.