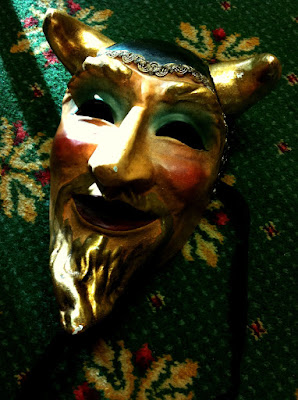 Griggs (1985) idea generation as someone else.

Easier to be silly in character (see Superheroes)

2) individual or joint role play to develop it further.

Our subgroup we busy having a go with finger paints while our fellow participants went off with balloons and masks. One of this number then spent much of the afternoon, even after the session, with two balloons stuffed up the front of his jumper. (We're an all male group).

The night before someone had played another participant's wife in a 'Human Sculpture'. You get used to the idea of this, yet another person had been 'The Army, or MOD' while yet another had been an 'ego' as distinct from the person.

This is the point of role play. Feels very Ibsenesque. Or Brecht. Theatre of the absurd.