Like founding Rome, social media needs to be tackled in more than one way 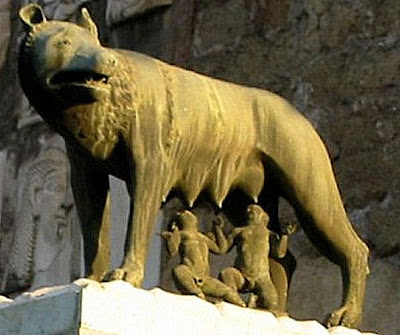 Romulus and Remus nursed by the roman capitoline wolf

You may know the story of Romulus & Remus, brought up by a she-wolf on the hills above the River Tiber, they were the founders of Rome, though only one would give the city their name.

One day, looking down at the Tiber the brother's decided to found a great city. They agreed to build a wall encircling a piece of promising land and to do so separately, starting opposite each other, at a distance and meeting in the middle. Romulus builds his wall low and makes quick progress laying out a great arc that heads towards his brother Remus. Remus builds as high as a man, his wall is tall, but progress away from the River is slow. Eventually the two Walls meet. Remus cannot contain his mirth at his brother's low wall and mockingly starts to jump over it back and forth. Unable to contain his anger Romulus picks up a shovel and knocks his brother across the head as he makes another leap.

Both approaches have their merits, on the one hand having and maintaining a presence while on the other doing something 'big'. If only one person is faced with the task of 'building Rome' what should they do?

Already I see the need for two people and two roles, the first, the 'low wall' is the website that is a consistent presence, not simply static web pages, but blog-like where visitors contribute content and share what is there. The 'high wall' are the events, or highlights, from commissioned videos or iTunes, to live forums and Webinars.

Neither should be seen as exclusive to the Internet, like the wall that surrounds Rome, web presence should be seen as part of the real world integrated with open days and events, mail outs by post or email, PR and traditional advertising too.

P.S. I was told this story as a boy, probably age 10 or 11, probably my first Latin lesson with Mr Byers. The story stuck, an example of the power of narrative, the Latin did not, though I had to study the subject for another four or five years. Translating 'oderint' as 'they smelt' was my highlight.