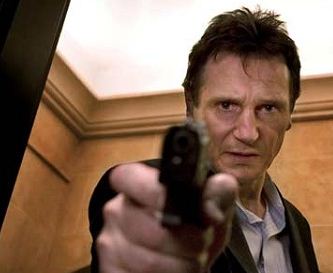 Of course our 14 year old son shouldn't have been watching the moview 'Taken', but for the benefit of his 16 year old sister on the long drive home this evening he set about detailing the action.

I found it hand not to laugh all the way through as somehow I had in my mind's eye the film that I have seen three times as he offered his esoteric description - All Liam Neson did apparently was talk in gutural noises and wave his hands about. Dialogue didn't feature, nor characterisation - just the action. What more does it need. (What was it Hitchcock said about dialogue, that is was a sound effect?)

At the end of this our 16 year old daughter perked up and said, 'Granny said I mustn't see this film and then proceeded to describe it in gory detail'. The image of my late mother drawing attention to the nastiest moments in the film brings a smile to my face, 'there's a bit when xxxx' and you mustn't see the bit when yyyy'. Oddly enough the threat of 'white slavery' as a line used with teenage girls wanting to go out late in the 1970s. There was someone ready to snatch my teenage sisters away around every corner of late night Newcastle upon Tyne.

Listenign to Philip Pullman talking about a new anthology of Fairy Tales we are reminded of 'Little Red Riding Hood' and of 'Hansel and Gretal'. The contemporary monsters being the likes of Jimmy Saville and  Gary Glitter.

The problem is - words can be even more vivid as you create something in your mind's eye that can be far worse, closer to home and therefore possible.

Narrative is a powerful thing, as is humour and violence if done correctly.

(Reading this back, this last line suddenly sounds like something that would be said by a Bond Villain)