Where did you join the throng and what's missing? 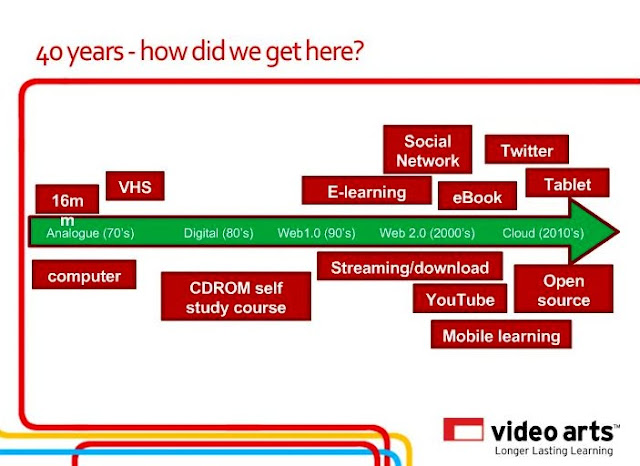 Professionally I came in with VHS - shot on Umatic then Betacam, edited on 1" tape then digitally. In 1986 Abbey National still distributed staff news on an AV slide carousel - there has always been inertia, though today change, new versions and upgrades are built into the system - or an accepted way of life. Visiting a regional BBC TV Station in 1989 I thought it was behind the production processes used in Soho and Covent Garden - the advertising industry, events and training business were all quicker to develop.

DVD are missing, as are intranets. Computer based learning in house, in a learning lab, then dispersed on internal systems developed in the mid 1990s.  You can put the Philips Laser Disc in there too - mid to late 1980s before the CD-ROM took over.

Streamling and downloads needs to be expressed very differently too - I'd give it a very thin wedge to start with. Great expectations of bandwidth from 2000 for the next decade meant that the DVD quality of 3D animationa, video and so on was impossible - yet the DVD market died. Someone the ease of distribution and ease of response on the network was considered more important.

Production values remain the thing that set Video Arts apart - and humour. If you are not paying suitable attention to the messages then it is fun to spoke the likes of Emma Thompson and Hugh Grant playing bank branch managers or other actors whose names immediately escape you but you recall from a period drama or a sit come, pops up with their arm in a sling with a health and safety story or as a junior manager with autocratic behaviours.

The laptop, after the desk top, was our first 'mobile computer' of course and today as well as the tablet Smartphones are a devise that plays a role in learning - for a start, everything I can do and read here I can manage on a Smarphone.

You do find new ways to learn - my favourite, a genuine creative problem solving technique according to an Open University MBA module I took - is to express some ideas such as this, or have a first swing at answering part of an assignment - then nod of. A ten minute sleep will do it. Either sinking into unconsciousness or coming back to consciousness I will be aware that I am dwelling on some condundrum and I just may have figured something out. Just don't do this a few hours before an assignment is due and decide as a result of your 'dream spirits' that you are going to rewrite from the top.

Hi Jan, What a brilliant comment. And you know I would have never thought of it - how could I? I've been part of that business all my career - a book, a lecture, a workshop or tutorial, even a conference - all of these were anathema to my desire to produce moving images ... then interactive moving images. It would surprise people if video arts started to produce books, or run workshops ... even more so if they started to run residential schools or set up a university or business school. Yet I think this is what some organisations need to do - as every school and university has its online presence ... so those only with pressence online need to ground themselves in the analogue world. I wonder if the Open University will stretch tutorials and residential schools to some campus based, year long teaching? The obvious candidate it the MBA programme, to build a hall of residence next to the Michael Young Building in Milton Keynes - that or far more compelling, relocate to a castle in the Lake District.