How would we recognise a digital scholar from the other kind if we met one? 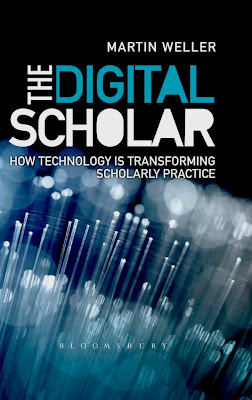 Martin Weller, in 'The Digital Scholar' looks forward to the time when there will be such people - a decade hence. I suggested, in a review of his book in Amazon, that '10 months' was more likely given the pace of change, to which he replied that academia was rather slow to change. That was 18 months ago.

Are there any 'digital scholars' out there?

How do we spot them? Is there a field guide for such things?

I can think of a few candidates I have come across, people learning entirely online for a myriad of reasons and developing scholarly skills without, or only rarely, using a library, attending a tutoral or lecture, or sitting an exam. But can they ever be considered 'scholarly' without such things? They'll need to collaborate with colleagues and conduct research.

I'm feel I'm in the process of going digital. Certainly, my latest outing into HE (H817) consists of me accessing all of my research materials online. Ditto the interactions with course colleagues. And actually, apart from a meeting on the 1st of March, my only contact with my fellow workers, for one job, has been entirely email / phone / Skype since November 2012.

All my postgraduate learning has been done since 2006, and apart from a couple of lent books and printed (slap back of hand) journals, pretty much all the access to research material has been online - and to be honest that's probably the reason I've been successful. The ability to do the scholarly stuff on the fly, snatching bits of time here and there. All that started my journey into what I would call digital scholarship.

My analogue scholarship, in my undergraduate days, was a depressing experience. I was particularly unsuited to searching through libraries, putting my name on waiting lists for key texts, and setting aside time to hit the books.