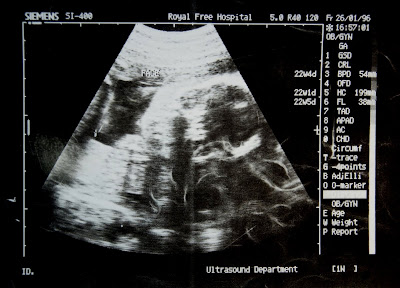 Fig.1. Scan at four and a half months.

My interest in the Web and learning is the interface between the two, from cradle to grave, from the a foetus at around five months once a brain has formed enough to register its surroundings through sound and touch to the moments before death as the faculties fail - and the interface between neuroscience and psychology and web-science through learning, from the perspective of both student and educator.

As a parent and child I have been present at both the moment of birth and death.

Our daughter, born in 1996 - it was a tad too soon to be trawling the Web for information – books played their part and soon both mother and foetus fell into a habit of listening to Mozart and falling asleep, a pattern that continued through our daughter's early years.

My mother died last year, but not after I defied the medical view of her condition and found 'a way in there' with an iPad loaded with photographs of paintings: images from a Van Gogh exhibition at the RA did the jobs, she had hosted a family visit and was her granddaughter's guide. She was born in 1931.

I even have a link, via the Web to a generation before, having interviewed my late grandfather at length to create his blog in abstentia.

Learning impacts the brain in ways that neuroscientists and psychologists are starting to map and explain.

Even the Web is yet to match the possibilities of the 98 million neurons of the human brain, though at the current exponential rate of growth it is expected to make it some time around 2030. By then both the mind and the Web will make more sense. What is going on in there? The brain. And what is going on out there? The web. And how does the interface and engagement between the two inform, educate and change behaviours?

P.S. If anyone can 'read' this scan and explain what I am meant to see I'd be most grateful. I have this moment on video too somewhere. It says 'face' on the scan. Really??

Have you read the book 'Brain rules' by John Medina a developmental molecular biologist - it is written in plain english - or visit his web site www.brainrules.net interesting

Thanks for this. I'll take a close look. I noticed that he suggests meetings should be walks - this is what Steve Jobs did all the time. I'm generally only with the dog. Would skiing count ?!