Observations of good and poor practice in the classroom

“The hardest and most time consuming prep for these classes are the slides.” This might be how our tutor feels - she said this a couple of weeks ago, but she’s cracked it with the cool, upbeat font and colours. That’s what would have me fretting for hours: what theme, what font …

This week there is stuff we just must understand how to do, and why we have to do it. Using Google Classroom (as as student). The docs shared are templates personal to us. We just have to complete one of these and hit the ‘Hand In’ button when we are done. 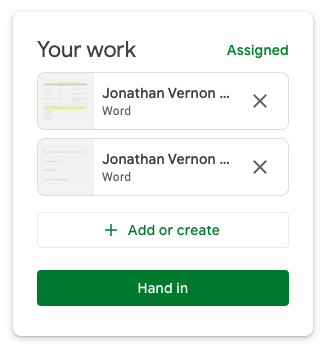 We were then taken through her expectations of what we need to include in each of these sections. Were Module 1 a written exam, then these would be ways (old school) to keep the examiner’s pen giving a tick. And the most likely way we will be tripped up is the process of handing in. [Beware using the term ‘to turn it in’ as this is now branded]. Habitually I would try to turn my Open University ‘Tutor Marked Assignments close to midnight. Like at 11:55pm. It caught me out more than once. Making sure I was ready at 11:45pm didn’t help much. It was only when I figured out I should turn something in the day before or a week before. Just get the flipping task over with!

We talked again about things we have observed in teaching that we consider good practice and poor practice. As we are invited to look online as well as see practice in college I have to wonder if we can stretch this to an episode of Waterloo Road, or Grange Hill, or my favourite ‘Sex Education’ which somehow created a bizzare, mid-Atlantic, international sixth form like college in the Welsh countryside colour-graded to look like the California. See British High School Television series. For the best representation of my school days see the film ‘If’, even ‘Tom Brown’s School Days’ or ‘Goodbye, Mr Chips’ even a bit of the original ‘St.Trinians’ for the all girls school (Casterton) down the road.

I recall my own school days and individual classes vividly; there is no need for a schoolboy diary for this: chalk and board-rubbers being hurled across the room, boys being threatened with corporal punishment if they did badly in a test … and a teacher getting me to change my answers in a written exam that they were supervising … let alone humiliation for getting something wrong - despite my best efforts.

Thinking of the positive, then it is the power of stories in Latin (Romulus and Remus and the foundation of Rome) - making something memorable, and on keeping a notebook of new words (tips for building vocabulary) (which I was told about age 12 or 13 and kept up for another 5 years), or trying to write a poem in French (even though I was rubbish at languages) and getting such great commitment and feedback from the teacher. And the teacher as a good disciplinarian who had our attention and respect, taught well beyond the needs of the exams to keep us motivated and would read every word of some of the very long homework essays I wrote and illustrated (Geography). In these three examples, the realisation that these three teachers were both interested in the pupil and their subject and wanted you to enjoy it as much as they clearly did. It was motivational.

Feedback and being attentive to the individual

Likewise discussing some mad-cap immersive multi-sensory walk in/sit down ‘pod’ experience as an installation for an O’Level year group Art Class and being persuaded to take an interest in Opera.

More up to date, like the last few days, rather than the last few decades, I shared the importance of knowing and using a students name, and checking what they would like to be called - Bella, not ‘Isabella’ or ‘Oliver’ not ‘Oli’ or nicknames like ‘Lolly’ rather than her name on the class list ‘Lahra’ - and getting Irish and Polish names correctly, whether Niahm, Siobhan or Saoirse, Wanda or Kasia.

A chance to be heard

And then pronouncing it correctly and then using their name often. And then, like the Chair in any meeting, trying to ensure that everybody’s voice is heard - not just your own, or ‘hands up’ if you know the answer.

Of course, avoiding ‘death by PowerPoint’ - the worst case of this being yet another ‘should have been retired’ historian, with no teaching experience, taking a class where, his back turned to us, he reads from one slide after another. In sharp contrast to lecturers I know who might put up 15 slides, each being an image as a catalyst or a prompt for discussion. And the best presenter ever, who provided a prose written text to cover, more or less, what he had SAID (unscripted) during the presentation. He was a barrister; he was used to talking in public.