Diagrams and Maps: Peninsula and Isthmus

I loved to visualise things, to make charts, and maps. For much of my professional career I have defined myself as a ‘visualiser’. I take the complex and make it appear simple through visualisation: photography, illustration, video …

Pain. Not recommended. Or was it? In the junior school, age 5 or 6 at the very most, we had a morning in the ‘senior’ school at Ascham House Prep School, Gosforth. We had a class, with maps, and Miss Short taught the words ‘Peninsula’ and ‘Isthmus’. I can see those huge maps held on a long wooden pool that were hung on the wall and opened to reveal the ‘Peninsula’.

At the end of the class, and on the way out before returning down the road to the ‘junior school’ my older brother (age 7 or 8) entered and I gave him a hug. I got a thick ear from Miss Short for stepping out of line. I wonder if I only recall the meaning of Peninsula and that map because of the thick ear I received … or was it because of my boyish wonder at the map? I think it must have been the map - being shown something I had never seen before, and have it explained. Maybe because it gave a description to the ‘Point’ at Beadnell where we spent our holidays. Beadnell Point is a peninsula. At least on the scale of my world, which was the short walk from our cottage to either the rock or sandy beaches. When the tide went out, some of the rock promentories from my bedroom window created an isthmus I could cross. My adventures could now be mapped and shared.

Give me some skin ! A Lesson in Cool

I use ‘they’ to avoid identifying the gender of the teacher or students.

The teacher was as cool as they come. They could not be flustered. Old school I would have pulled a tray out for mobile phones (or the paper bin) and sent at least one person out of the class. That is not the thing to do. Some of the students I learn later are SEND or EHC.

The purpose of the class was to run through some definitions, like those above, on a template where the words have been left out. Each student had a paper copy to complete. It transpires that one student had done a different course and covered this the year before and could rattle through everything like an undergraduate in medical school. There was one student who very clumsily kept their phone on, just under the desk, as they read and replied to text messages. Intermittently they would interrupt the class with a complaint, or fasile remark. Somehow, I still can’t fathom how, by the end of the class this student had jotted down a least a few of the answers - albeit once someone had given the answer.

As they were a close knit social group having them work in twos or threes worked well to get everyone working together. One group may have had to be a four, as one person didn’t want to be left out, or with someone they didn’t get on with. Understanding and going with the social dynamic was crucial.

I liken the atmosphere eventually to being more like a Scout Leader around a campfire than a teacher at the end of the desk.

Far from seeing how digital could contribute here > we had a 3D human body with 3D goggles in mind I rather thought a real 3D model made in Props by the Theatre Students would have the most impact. A giant finger like a large log in the middle of this virtual fire in the centre of the class.  Of course, medical students do get the real thing. That must be impactful. The very thought of it makes my brain prickle. The multi-sensory and emotional experience of cutting into a cadavre to look at the layers of the skin.

NOTE TO SELF: There is a template for more formal evaluations. I will use this, but any posts will be PRIVATE.

The first stitch of the images and the magic begins. Choices have to be made over labels, over direction or the words used with each tag. Still testing what can be done already I see the need and value of some deeper planning. If this is to be seen by prospective students and parents then some indication of practice would be helpful - in fact the kind of information shown in the cards on each student: what they studied, where they are going next and a little about their learning experience.

And some gamification: a quest, in which a range of art materials have been placed around the hall to collect, or a quiz, and some video as well as the planned mid and close-up shots.

In brief, it requires a brief. To avoid the criticism of 'so what?' I need to address these questions:

Who are we speaking to?

What do we want to say?

What do we want them to take away from this message?

Future students and parents don't realise the quality of achievement possible and the paths that this opens up to an arts student.

We are speaking to future students and their parents, rather than celebrating the work of those shown here - who have, after all, made the next step already.

We want to show and say what a wonderful experience it is to be a student at GB MET.

Gallipoli: The First Day - learning in new ways about events nearly 100 years ago

Fig.1. Screengrab from 'Gallipoli: The First Day' - an extraordinary multimedia, interactive 3D consideration of the events of this tragic conflict.

This is the 'Avatar' of production values. Sympathetic. Balanced (I hope, it includes the Turkish perspective) and compellingly engaging. It sets the benchmark for delivering this kind of content. It says something too of the blood-letting, nation-creating, soul-searching in relation to loss in this way and on this kind of scale that many European countries will need to revisit over the next few years.

A teacher will never have the budget to create this kind of content, so how do they willingly use it in their teaching?

Does it motivate someone new to this story to find out more? How does it work as education or entertainment? Where does the funding come from? As mash-ups go this is very professional. The learning design and its gamified values are second to none.

(First posted in OpenStudio in my R&R 'concept board' as part of the MA ODE module H818: The Networked Practitioner). 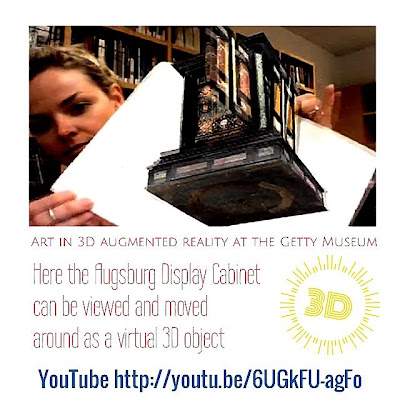 Imagine a room in which students pick an item from a museum then do this with it on their screens. You have their attention. How do they then take it and create a string of memories that take them through assignments and beyond? 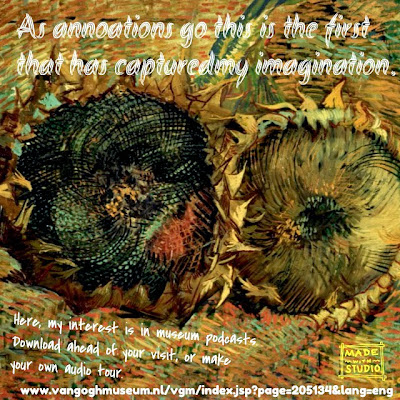 Imagine downloading ahead of a visit the audio tour for a special show? My visit to the Royal Academy to see the Van Gogh letters had my mother as the audio tour - I wish I'd recorded it. Where we now have ONE voice and script very soon there will be many - then you can choose who you want as your guide. 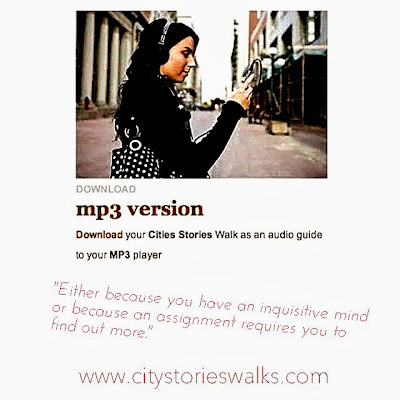 And then imagine an audiotour pinned to locations as you walk around a town, showing you before and after vistas, telling you stories or offering an alternative soundscape. Not if your in a hurry. And if on your daily commute you'll turn yourself into an expert and need to upload your own research and insights. Here the 'Blood, guts and babies' medical tour from the Wellcome Foundation. 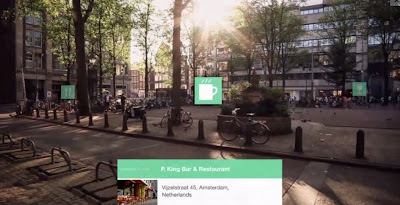 And at the risk of getting hit by the next best, take your eyes of the footpath and take a augmented view not just of a shop or cafe, but illustrated history ... London Blitz would be scary, to see a motorbike currier heading towards a bomb crater.