H800 Wk13 Activity 4b Frankly, Prensky and his lot deserve to be lampooned and satirised

W 13+14: Activity 4b: Making sense of the student experience

As you read consider the following questions:

What do you understand by the use of the term ‘moral panic’?

Or the ‘immoral panic’, or the lunacy that has academics and politicians jumping on catch-phrases like ‘the Net Generation’ that are totally sensationalist, eye-catching, worthless, unfounded, claptrap.

In fact they are pandering to our base desires, the belief or wish that there is a narrative to our existence that says it is always rubbish now and can be fixed by reading their book, with its oh too neat title.

Here's another soap-box wonder who believed she had the answer to everything: 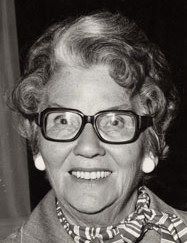 Moral panic (Cohen, 1976) … Mary Whitehouse caused many in relation to smut on TV.

There is a pressing need for theoretically informed research – the concept of ‘Digital Natives; is popularist and designed to sell a book(s) and the lecture/consultancy services of the person who coined the phrase, ‘Marc Prensky.’

So what is a ‘moral panic’?

Anything that gets JPF (just plain folk, a John Seely Brown expression I love) feeling anxious, that things on right in their world and the false prophet spouting doom and gloom is also the one with the answers - just follow them! Converts then to rant about this High Priest of the quick fix - Prensky is of course right about everything (just read the pages of gushing enthusiasm that he puts in his books. Try reading them; for a different product much of this would be professionally written to go on the back of a Cornflakes packet). The educational world will be saved from the horrors of the natives gone digital, if we only listen to him (then praise him to the hilt).

The research from Bennett says this about Prensky's thesis:

Dangerously Bennett reports ‘to address this proclaimed challenge, some high-profile commentators are arguing for radical changes in curriculum, pedagogy, assessment and professional in education.’ 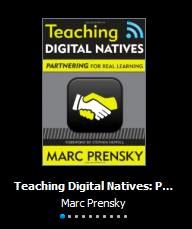 Prensky and his lot deserve to be lampooned and satirised

Worse, they are given genuine educators working with technology a bad name. Professional educators are on the side of teachers and lecturers creating tools that are convenient, easy, transportable, and hopefully engaging, best of all permitting a large class, or cohort to have some sense of ‘student-centred’ learning through tools that enable a taste of the that priviledged Oxbridge one-to-one tutorial that 800 years on is far from threatened by e-learning and digital everything, indeed it thrives and has become even more precious and valued.

I was suckered into believing Marc Prensky as a naive MAODE student in my first module, H807.

I wanted to believe that Prensky had the answers to everything because I was working in a business in 2000/2001 that wanted clients to believe that if we created immersive, game-like learning online for them their students would teach themselves. Prensky pushed the problem, we offered a response.

This 'Digital Natives' thing is as vacuous as airfreshening devices in the home; it is a marketing gimmic designed to sell a product.

Prensky has no answers, and befuddles it all for us, worse academics have initially picked up his thread and have been terribly slow to get the research done that quite frankly demonstrates the nonsense that has been used to sell Prensky’s books and lecture series.

'Claims are put forward with limited empirical evidence' ( e.g. Tapscott, 1998) or 'supported by anecdotes and appeals to common-sense beliefs' (e.g. Prensky, 2001), who also cites Captain James T Kirk form Star Trek (sic) … as if a fictional character, or the show (rather than its author) should be the one to cite at all.

Were 'Digital Natives' presented as an ECA it might pass, but the feedback would call it 'light' and poorly referenced.

'The reality is complex and diverse', says Bennett not just across a nation, but probably in many classes themselves. It’s as if Prensky and his crew are suggesting that this generation were born with a third eye or six fingers.

(Actually, they are ‘The Simpson’ Generation and we need to worry that they’ll all turn yellow and chop of a finger from each hand).

Can we take seriously an academic writer who cites Star Trek? And references quotes like this? Prenksy says he studied at Princeton and Harvard? What did he study?

Prensky could be, making it up.There is no means to check most of the references, if you can call them that.

I bought 'Educating Digital Natives' it is unacademic twaddle from beginning to end.

It's no better than one of those self-help books you can pick up in an airport.

So what is a ‘moral panic’

Anything that gets JPF (just plain folk, a John Seely Brown expression I love) to have a rant … ideally to rant about how this prophet Prensky is right about everything and the educational world will be saved if we only listen to him (then praise him to the hilt).

What does this article suggest to you about the technological determinist thrust of the Net Generation argument?

Academic writers and current research, writing in calm, objective tones (Kennedy, Conole and others) knock flat every piece of ‘hear say’ from these authors for what it is – journalistic, sensationalist nonsense.

I have to question Marc Prensky’s credentials; I simply cannot believe an academic with a Harvard MA could possibly write like this, indeed I want to ask Harvard to confirm that this is the case.

‘The researchers found that only a minority of the students (around 21%) were engaged in creating their own content and multimedia for the Web, and that a significant proportion of students had lower level skills than might be expected of digital natives.’ (Bennett 2008:02)

Kennedy’s research in Australia says it all.

Emerging technologies are NOT the lifeblood of a generation, far from it. Research amongst students in three Australian universities showed that:

i.e. far from universal in this generation as the self-publicists of ‘Net Generation’, ‘Digital Natives’ or ‘Millennials’ would have us think.

Is there a theoretical or empirical basis to the arguments that are presented using the terms, Net Generation, Digital Natives or Millennials?

As Bennett said, we had a go at kids watching too much TV in the past. This is their lives and ours; it is the world as it is today. Nothing whatsoever has changed physiologically or psychologically about us humans, how we develop and grow.

The concept of any generation been universally similar fails to recognise differences related to:

Internet use by teenagers is far from uniform

Multiskilling claims … are facts that equate to young people at this stage in their developmental processes and is the same today as it was a thousand or ten thousand years ago – ability to work in fine detail, to work on several tasks at the same time.

‘A significant proportion of young people do not have the levels of access or technology skills predicted by proponents of the digital native idea. Such generalisation about a whole generation of young people thereby focuses attention on technically adept students. With this comes the danger that those less ale will be neglected and that the potential impact of socio-economic and cultural factors will be overlooked’. (Bennett, 2008:02)

‘Although such claims may appeal to our common-sense perceptions of a rapidly changing world, there is no evidence that multi-tasking is a new phenomenon exclusive to digital natives’, (Bennett, 2008:02)

Just because something resonates with our personal observations doesn’t make it so. Frankly, Prensky et al should be stand-up comics – you have to laugh, at their nonsense and how gullible we are to want to believe them.

‘Generalisations about the ways in which digital natives learn also fail to recognise cognitive differences in young people of different ages and variation within age groups.’ (Bennett, 2008:02)

People change their approach according to their perceptions of the task.

The problem is that Prensky is an easy read.

Too many people prefer this than wading through dry, hard-nosed analysis of the truth. The truth? Business as usual. E-learning to education is what a whole raft of tools were to the housewife in the 1950s and 1960s … they make it easier to get the job done. They make life more convenient.

In the case of education it makes realisation, for some, the dream of more student-centred learning, possible.

If there is a generational shift it ought to be that more people are gaining access to an education on their terms. We have moved from a teacher-centred model of teaching (Kember, 1997) … which only existed/exists of necessity (not everyone has ever been wealthy to give their children a personal governess then tutor) … to supporting students’ active learning, the student-centred model (Gibbs, 1995).

If there is, what do you think are the key features of this change in generations?

Did serendipity bring me to this?

'An evaluation of students' perceptions and engagement with e-learning components in a campus based university'. (2011) Afam Ituma

All your answers to the MAODE in eight pages.