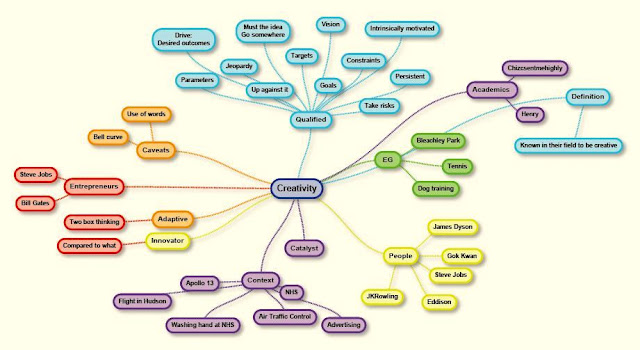 Though cryptic this means something to me and will jog the memories of my 12 or so fellow OU students on 'Creativity, Innovation and Change'.

The reference to 'Chizsentmehighly' refers to Mihaly Csikzentmihalyi and Chapter 1 of the Course Resource Book ' A Systems Perspective on Creativity'. Henry refers to the course Chair, Professor Jane Henry who also features in the 28 minute audio programme that I have now listened to FOUR times. (In surveys I come out extremely low on my ability with or liking of 'auditory' learning; give me a visual and some words, please).

In a subgroup and then in the form we discussed the meaning of 'creativity' (ostensibly in the buisness context). We found we needed to qualify it, to set parameters and have goals or outcomes. Are you, for example, creative if your ideas are in your head? Or if they are 'random acts of weirdness?'

We were made to think about use of models too, there are a couple in the Block 1 reading. The important thing I have learnt is to recognise that a model is one person's simplification of the complex. You may never get onto their wavelength, and if you do, recognise its failings. Figure 1.1 in the Csikszentmihalyi chapter is an example. Csikszentmihalyi (1999) Having studied Engestrom I prefer his Activity Systems. Tersa Amabaile in 'How to Kill Creativity' has a more easily understood Venn Diagram with 'Creativity' at the centre of Expertise, Creative Thinking Skills and Motivation.  (Amabile, 1998)

Context is important. Although I've put Apollo 13 here, we actually discussed some other example of ingenuity in a moment of crisis. This on the basis that creativity is often forthcoming at times of crisis (indeed one of the 'business guru's Jane Henry interviews charts innovation and creativity and puts in the need for pressure as delivery of a project is reached). The other examples remind me of the eclectic mix of backgrounds of my fellow students from whom some rich examples were given: the Army, Air Traffic Control, Manufacturing electronic lighting systems in Finland, TV, the NHS, Marketing, a County Council and so on.

Gwok Kann, Jackson Pollock, Greyson Perry and Travey Emin got a mention, as did Steve Jobs, James Dyson and Bill Gates. We got into pigeomn-holing people as 'innovative' or 'adaptive' and were warned of a 'two box thinking' (that we can quickly confine oursevels to a limiting debate).

Something similar was achieved by a Game where in groups we were given a set of nine cards: 7 with letters on them, one with a symbol and one blank. We were told to come up with a three letter anagram that would be readily understood by others. We did QE2, KPI and then by tearing the 'Pi' symbol in half and making it into an 'I' 'CIA'. In this instance we got into a conversation about how we set ourselves parameters, that we automatically follow rules and make assumptions even when there is no need to do so. We could have turned the cards over and written any letters we liked. The game had not come with a rule book.

Clearly I'll be adding to this, letting the tutorial act as a catalyst on the books, CDs and other online resources, as well as discussions in our tutor group.