Analogical thinking, from Churchill's 'iron curtain' to the invention of Velcro.

(Indeed neurologists believe there is a gene that causes human beings to think in metaphors and that it is exactly this that allows us to invent, in fact  creativity in the face of adversity still rings true today, though we are not  facing a Sabre-toothed tiger at the entrance to the cave, or changing climate  with the onset of the ice age.)

Analogy - transfer of an idea from one domain to another.

Metaphor - resemblance or flavour. A way of making the strange familiar p.85. Or the hard to comprehend (trees, ecosystems, architecture, traffic lights). 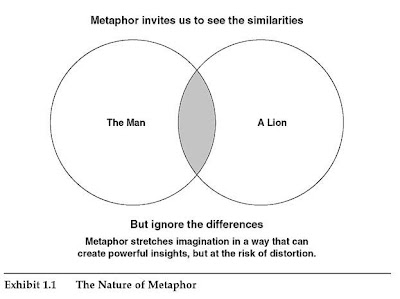 Manager as captain or conductor.

1) Pick three metaphors (a, b, c) for organisations, for instance the organisation as machine, organism or political system.

3) Try and relate each characteristic to a feature in an organisation that you know.

4) What features of organisations do these characteristics highlight, and what do they conceal?

A) As an orchestra, ABB, 1999. A corporate cliché I have seen applied to Abbey National and others. Visually it may have resonance, though the cost of featuring musicians, let alone playing a piece where used is prohibitive to all but the largest organisations. The characteristics are of complementary divisions 'playing the same tune' with woodwind, strings and brass, for example representing the different businesses. With a single conductor it may better fit the largely privately owned enterprise, say a Richard Branson and Virgin, or a Russian Oligarch, though no longer News International and the Murdochs. The features perhaps work for News International with newspapers and TV interests, even having a go with MySpace being largely media, whilst Branson is more the empirical Napoleonic conqueror of anything going?

B) As a strawberry plant, i.e. a federal organisation that has grown organically rather than by acquisition, perhaps like a clearing bank? Perhaps like a franchise such as Kall-Kwik. Or a retail chain, appropriately, such as Body Shop. The characteristics I think of are independently managed businesses that sell the same range of products, with common branding and sales materials, though with some localisation. This works well in relation to the plant performing differently on a variety of local soils/climates i.e. the same organism but in different settings/opportunities to flourish or not.

C) As an empire, where a holding company or private equity group has gone on the acquisition trail buying up businesses for the opportunity, rather than as sets of businesses that complement each other, so take over, create economies of scale in management and Head Office functions. The characteristics here feel as if it should be military with no good outcome, ala 'Wall Street', though there are or nave been more benevolent, squid give groups or holdings companies in the past such as the long gone Ferguson Industrial Holdings PLC, or perhaps Unipart Group of Companies (UGC). This suggests a dictator at the top, though the leaders can be benevolent even if a tall pyramid is the business structure.

If the organisation doesn't fit the metaphor, it is too simplistic a metaphor!

The metaphor can intone a favourable or negative bias. For example, if asked in research to describe the organisation you work for as a car do you want it to be a Citroen 2CV, or a VW Golf, a Rolls-Royce or Ford Escort, a 1980s Ford Cortina or a Triumph Stag?

A business that is a machine I the digital age is surely going to get left behind through its rigid bureaucracies and hierarchies, a predilection for quantitative measures (ROI and KPIs) too?

(My concpetion of the School of Communication Arts. Which one am I?)

In the past I used successfully the idea of 'nurturing' to represent first a school (Arts College) and then my own services to graduate recruiters.

In 2011 it seems archaic to think of teachers or tutors in this way, people who are moderators, coaches or facilitators. (The ecological metaphor is used with a cartoon not dissimilar to my own p.88 not shown here for copyright reasons, to represent people as seedlings or potted plants).

From Table 4.1 metaphors of businesses in relation to:

Take expressions of the above for a 'Machine like business, as 0 on a scale and

a) you place your own organisation and b) yourself.

I'll do this one offline.

Network (Morgan, 1993) business as a spider-plant.

Complex adaptive systems: termites, flock movements,  (anecdote of the aeroplane simulator managed by parts of an audience that  collectively cancels out the oddball, incompetent, inattentive or would-be plane-crashing individuals) p96 (Berreby, 1998:45 and Clark, 1997:75).

'people do not need to be told what to do: they are intelligent agents continuously learning and modifying their behaviour on the basis if feedback'. Handy (2010:97)

What metaphor would you use to describe your organisation?

Describe the process of management as you experience it.

A metaphor to describe my management style.

Take a current task, associate with it an appropriate metaphor then give it  another that is far removed from the first.

Four ways of thinking about the world:

Activity 4.9 WHAT METAPHOR WOULD YOU OFFER FOR MANAGEMENT IN THE 21st CENTURY?

I've experienced many, including from the table:

For the 21st Century I like the model of the modern ideas lab in which innovative ideas are trialled, developed then kicked out with a chunk of financing to thrive however turns out best!

This is the sink or swim analogy.

But after suitable teaching/coaching. Or perhaps a metaphor of procreation, raising and nurturing a child then letting them go? So organic or animal (or in particular mammalian or human).

Stacy (1996) and danger of controls, procedures and Pre-specified objectives.

FROM MY OU STUDENT BLOG

'Consider this medium as like talking with your fingers - half-way between spoken conversation and written discourse.' (Hawkridge, Morgan and Jeffs, 1997,  quoted in Salmon 2005)

Salmon, G (2005) E-moderating. The Key to teaching and learning online.