Fig.1 From a display case in the Great North Museum, Newcastle.

As a kid visits to the Hancock Museum, as it then was, were rare but memorable: perhaps every other year from the age of four. The shift in how the objects are curated today is to make the connection between the visitor and the object: to indicate its relevance.

The Internet doesn't simply but one thing next to another, but many. The steps from the display cabinet above could take you to buying the football shirt, google maps to the place the artefacts were found, TripAdvisor on whether to go there and how, clips from Newcastle's greatest moments ... 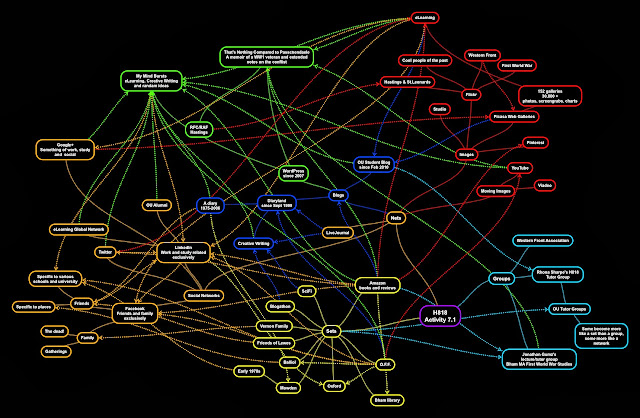 Should I be sharing this here?

Nearly three hours after sitting down to work on the ECA I have blogged ONE only of the two ideas in my mind (expressing them takes considerably longer than simply having them). The good news is that this effort has developed my ability to use Artpad and a tablet to do a sketch and share it, to link articles from New Scientist and my entries to various versions of me. I have contributed to the Tutor Group and H808 Course forums, and so no doubt confirmed my approach to the ECA, which is still 9 days away ... and grabbed, cut or loaded five or six items into my OU eportfolio, which I still trust will be successfully transmogrified into something better during the course of 2011 without content being lost. I really do not want to give a week to transferring over 1000 pages ... one at a time. Currently nothing will export by the routes supplied.

I'm not ADHD but I am easily distracted, drawn into a web of my own making as I click here, there and everywhere to achieve some simple goal.

However, I am grinning from ear to ear because my brain is buzzing with ideas; I like it this way. I'll keep the blog on quantum evolution 'til tomorrow. Meanwhile I have to have a haircut, and decorate a wall in my wife's study so that when I am on Skype to New York this evening I don't look as if I've just got out of bed ... which is of course how anyone looks if they work from home and call this work.

The thing is there are relevant voices speaking to me from all kinds of directions.

I relish the LinkedIn E-learning 2.0 forum threads that pop up all day; they are read, some deserve a response, or at least being snatched for future reference. And when I want to achieve something with an image, audio or video, I will stick with the software, or ditch it for something else, until I get the outcome I desire.

So am I learning, even if the contents of my head must wait while my fingers play.