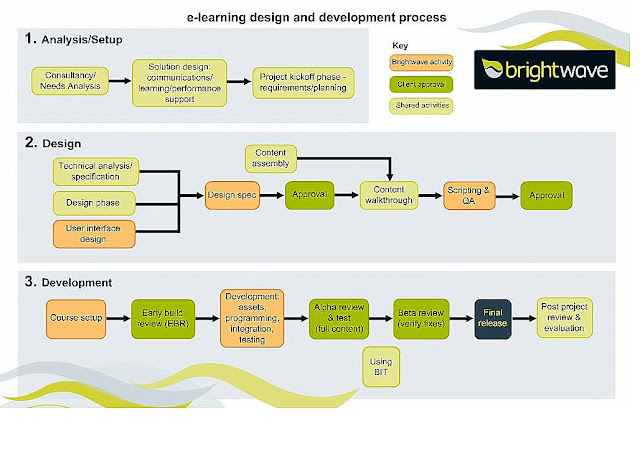 Great to have a few months between modules as it gives me the opportunity to look beyond the MAODE modules at what interests me most: learnign and development in a corporate setting, the practicalities of enhancing the skills and building on the motivations and interests of people in their daily working lives.

The above chart adds detail to a familiar productoin process.

The benefit of turning to an outside supplier for such services (and for the the supplier to call upon the specialist skills of freelancers), is the accountability, the clarity of the stages, the parameters set by budgets and schedules and the lack of politics, as well as the engagement with a diversity of cultures, experiences and background which you simply do no get when everything is carried out in-house, the biggest bugbear of most providers in the the tertiary sector who insist on doing it all themselves.

Watch some of their videos

Particularly impressed with Laura Overton who I have heard speak at Learning Technologies in the past.

Brightwave, quite rightly, include a transcript with these face paced, tightly edited, packed interviews.

This doesn't preclude the benefit of taking notes. I also cut and paste the transcript then go through highlighting, re-arranging the text and doing what Jakob Neilsen would call making it 'web friendly'.

Even if I don't share this online, the act of doing this is a vital way to engage and memorise the information.

I've come to understand in the last few days (B822 End of Module Exam) that a 'mnemonic' is any devise or technique that aids memory, so reading this start the mylenations process, comment and those tracks become established. Cut and paste, doing something of your own with the content, go follow the links, add links of your own, cut and paste into a blog (here or externally), then share it into Facebook or Twitter and pick up others who know more or less and can contribute.

All of this is a very human way og aggregating and securing knowledge.

Ideally everyone would be milling around my garden right now, we'd pick up the conversation, then drift away to other things.

What is the library, when the totality of experience approaches that which can be remembered?’

‘What is the library, when the totality of experience approaches that which can be remembered?’ (Rausing, 2011:52)

Speaking at the Nobel Symposium 'Going Digital' in June 2009 (that ironically took another 2 years before it was published0.

Things are gong to have to speed up in the new age of digital academia and the digital scholar.

We have more than a university in our pockets (an OU course), we have a library of million of books.

(I have an iPhone and iPad. I 'borrow' time on laptops on desktops around the house, libraries at work).

I’ve often pondered from a story telling point of view what it would be like to digitize not the libraries of the world, but something far more complex, the entire contents of someone’s mind. (The Contents of My Mind: a screenplay) It is fast becoming feasible to pull together a substantial part of all that a person may have read and written in their lifetime. (TCMB.COM a website I launched in 2001)

‘Throughout history, libraries have depended on destruction’. (Rausing, 2011:50)

But like taking a calculator into a maths exam, or having books with you as a resource, it isn’t that all this ‘stuff’ is online, it is that the precise piece of information, memory support or elaboration, is now not on the tip of your tongue, but at your fingertips.

Rausing (2011) wonders about the creation of a New library of Alexandria. I wonder if we ought not to be looking for better metaphors.

‘How do we understand the web, when this also means grasping its quasi-biological whole?’ (Rausing, 2011:53)

Tim Berners-Lee thinks of Web 2.0 as a biological form; others have likeminds. But what kind of growth, like an invasive weed circling the globe?

There are many questions. In this respect Rausing is right, and it is appropriate for the web too. We should be asking each other questons.

‘Do we have the imagination and generosity to collaborate? Can we build legal, organisational and financial structures that will preserve, and order, and also share and disseminate, the learning and cultures of the world? Scholars have traditionally gated and protected knowledge, but also shared and distributed it, in libraries, schools and universities. Time and again they have stood for a republic of learning that is wider than the ivory tower. Now is the time to do so again’. (Rausing, 2011:49)

If everything is readily available then the economy of scarcity, as hit the music industry and is fast impacting on movies, applies to books and journals too.

It seems archaic to read the copyright restrictions on this Nobel Symposium set of papers and remarkable to read that one of its authors won’t see their own PhD thesis published until 2020.

‘The academic databases have at least entered the digital realm. Public access – the right to roam – is a press-of-the-button away. But academic monographs, although produced by digitised means, are then, in what is arguably an act of collective academic madness, turned into non-searchable paper products. Moreover, both academic articles and monographs are kept from the public domain for the author’s lifetime plus seventy years. My own PhD dissertation,19 published in 1999, will come into the public domain in about 110 years, around 2120’. (Rausing, 2011:55)

The e-hoarder, the obsessive scanning of stuff. My diaries in my teens got out of hand, I have a month of sweet wrappers and bus tickets, of theatre flyers and shopping lists. All from 1978. Of interest perhaps only because 10,000 teeneragers in the 1970s weren’t doing the same in England at the time.

What then when we can store and collate everything we read? When our thoughts, not just or writings are tagged and shared? Will we become lost in the crowd?

‘What if our next “peasant poet,” as John Clare was known, twitters? What if he writes a blog or a shojo manga? What if he publishes via a desktop, or a vanity publisher? Will his output count as part of legal deposit material?’ (Rausing, 2011:52)

The extraordinary complex human nature will not be diminished; we are what we were 5000 years ago. It will enable some, disable others; be matter of fact or of no significance, a worry or not, in equal measure.

A recent Financial Times article agrees with Robert Darnton, warning that by means of the Books Rights Registry, Google and the publishing industry have created “an effective cartel,” with “significant barriers to entry.” (Rausing, 2011:57)

‘If scholars continue to hide away and lock up their knowledge, do they not risk their own irrelevance?’ (Rausing, 2011:61)

The Cloud : A Simple Storage Service that has some 52 billion virtual objects.

Folkbildningsidealet: A "profoundly democratic vision of universal learning and education"?

Incunabula: "Incunabula" is a generic term coined by English book collectors in the seventeenth century to describe the first printed books of the fifteenth century. It is a more elegant replacement for what had previously been called "fifteeners", and is formed of two Latin words meaning literally "in the cradle" or "in swaddling clothes"

Maimonedes :  His philosophic masterpiece, the Guide of the Perplexed, is a sustained treatment of Jewish thought and practice that seeks to resolve the conflict between religious knowledge and secular.

Schatzkammer : ‘Treasure Room’, and in English, for the collection of treasures, kept in a secure room, often in the basement of a palace or castle.