A number of months ago I wrote a blog about buying a smartphone (I know what you're thinking: this sounds pretty boring!)  The blog ended on a question: 'where did this device come from?'  The device I'm referring to is, of course, a computer.  Such a simple question can be answered in very different ways and one way to answer it is to think about the people who played an important role in either thinking about or creating one.

This is a follow up blog post about a trip to a part of London that I had never been to visit before, but one that I have known about for quite some time.  My quest was simple: to seek out the birthplace of someone who is known as the 'great uncle' of computing.  There are, of course, many other stories and journeys that can be connected to the one that follows, and I hope that this is going to one more in a very long series of blog posts.

A journey in reverse

April has been a month of contrasts.  The first few months were absolutely freezing, but this day was enticing.  It was a day that I couldn't resist exploring a bit of my own city; taking a journey that I had been threatening to make ever since winter had descended with certainty.  I exited Westminster underground station and looked skyward, through glorious morning sunshine, quickly finding Big Ben and the houses of parliament.  In some respects, it seemed like an appropriate starting point, since government had played an important role in the life of Charles Babbage, a Victorian gentleman, mathematician, engineer and (if we can stretch it this far) raconteur.  Babbage is famous for proposing and partially designing mechanical calculating engines that echo aspects of the inner workings of today's modern day computers.

The purpose of this blog isn't so much to talk about Babbage (although he is the reason why I am writing in the first place), but more to record the trip.  When it comes to Babbage I've got numerous books and notes and read and re-read, and I think it'll take time to understand the fine detail and significance of his inventions.  In some respects, this is a journey of contextualising, or understanding.

'Excuse me, sir... we want to take a photo...', said a voice behind me.  I peered into my smartphone, thumbing at a googlemap, trying to figure out where I was.  A few paces away, the tourist had gained her view of the London Eye, and I was off, gingerly taking my first steps towards a new (albeit modest) adventure.

Within five or six minutes of walking, I had pieced another part of London together in my head.  My knowledge of the city is fragmented across three dimensions; distant childhood memories, an improving knowledge of the underground map, and a misunderstood knowledge of the monopoly board.  I recognised streets that I have previously travelled through whilst riding on my motorbike towards my office, traversing them in a different direction.  I soon knew where I was heading: I was going towards the Elephant.

Within ten minutes, I found myself at the Elephant and Castle, a bustling inner city area serviced by the Bakerloo and Northern underground lines, a train station that heads north to Kentish Town, and bus routes I had never heard of.  Remembering a series of photographs that had featured in the London Evening Standard newspaper a couple of days before, I decided to try to find a scene that I remembered.  I dived into some walkways and emerged at a train platform that overlooked one of the most notorious housing estates of the 1960s: the Heygate estate.  I know next to nothing about architecture but I do know that they Heygate was one of a number of brutalist housing estates that were built between the 60's and 70's.  Whilst on one hand there is a certain elegance and simplicity in its structures, on the other hand the structures are inhuman, stark and impersonal.  The impersonal nature was amplified since all the windows I could see were boarded up with steel shutters.  These, I thought, looking from the outside, were places to live in.  These flats didn't look like homes, and I'm sure I would have felt the same if I had visited when they were fully occupied.

I accessed the rail platform through the shopping centre.  Built in the 1960's, the shopping centre was showing its age.  In comparison to bright and airy modern malls the Elephant's shopping centre was slightly claustrophobic.  Chain stores were the exception rather than the rule, which was something I liked.  On the second floor, I decided that a well deserved up of tea was overdue, so I popped into a relatively new Polish café I had visited once before.  It's functional manner, i.e. you had to clean your own table, seemed to be entirely in keeping with the Elephant's very functional shopping centre.  I approved.

After a few false starts, I walked past the Strata (Wikipedia) tower block, around a gentle curve in the road and onto the Walworth Road.  Within five or so minutes I had found what I had been looking for; a simple blue plaque commemorating the birth of Babbage, the 'grandfather of the computer', situated on the corner of Larcom Street.  Walking down Larcom Street I discovered another blue plaque, this time commemorating the birth of Micheal Faraday and his work on electromagnetism.  Both plaques were on the side of what is now a clinic. 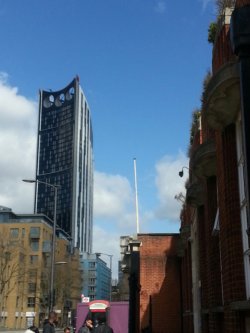 I took a couple of minutes to do some more exploring.  I really liked Larcom Street.  It offered a slight bend, and then revealed a quiet tree-lined road, filled with bay fronted three level Victorian terrace houses.  The hustle and bustle of Walworth Road disappeared into the background.  Cars parked aside, it felt as if I had stumbled into an oasis of history; a time warp.  Modernity came into view again when I arrived at the end of the street.  I saw modern flats on my right, recently constructed, and there was some building work going on, diggers gouging the ground in preparation for foundations.

Ten minutes later, I was back on the Walworth Road, astonished by its busyness and the single row of shops that seemed to go on and on and on.  With Larcom Street behind me, I caught sight of fast food establishments and the wonderfully eclectic East Street market which dates back, in one form or another, to the 1880s (as another blue plaque testified).  Stall holders had just about got everything ready for the day's trading by the time I had arrived.  I also accidentally found another blue plaque which celebrated the birth of another famous resident; Charlie Chapin.

My journey home took a bit of time.  Walking back to the Elephant, I passed by a fire damaged museum, and then found a bus stop on the New Kent Road - the direction of home.  This wasn't a big or exciting adventure, but it was one that was fun and has made me slightly more aware of my own city.  Moving forwards, what I've got to do is continue with my reading about Babbage and take at least three more journeys.

The next one (about Babbage) will be to the town house where he not only dreamt of mechanical computers, but also built parts of them too.  Then there's a trip to Greenwich, which relates to a key vector of inspiration that caused Babbage to start his life long quest to make a mechanical computer, and then a visit to South Kensington, where the remnants of his computing devices are currently housed.