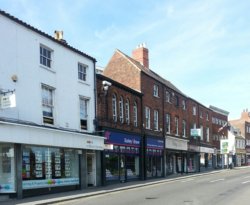 Riding from London to Lincoln on a motorbike is a blast.  I decided to be sensible and set off after the rush hour but I just couldn't wait.  I edged out into the London traffic at nine in the morning and quickly realised that I had made a mistake.  After about half an hour of wrestling with traffic, I was on an A-road heading towards the London orbital motorway.  Fifteen minutes later, I was circumnavigating a large chunk of London and heading towards the M11; a route that I hadn't done before.

The reason for my trip up to Lincolnshire was to visit my parents.  It was the third time I did this trip via motorbike and on this occasion I decided that I wanted to go on a journey that I had promised to take ever since I started to learn more about the history of computing.

Lincoln is a city that I know well.  I spent quite a lot of time there, staying at my parents house whilst I got my head down to spend many hours doing some computer programming for a research project I worked on a couple of years ago.  During this time I also gained my motorbike licence.  I used to spend hours riding to and from Lincoln, gaining some kind of perverse pleasure if I became snarled up in a traffic jam (since it gave me the opportunity to practice clutch control and feathering the back brake).  Gradually, some of the city's secrets revealed themselves to me; the links between the old and the new - the contrast between the imposing medieval cathedral and ancient castle juxtaposed against modern industrial units and trading estates.

The M11 was a dull but quick road.  Within a couple of hours I skirted part Cambridge, a city that I've been to before a number of times but barely know.  As I rode I made a mental note that I need to return.  When it comes to the history (and the future) of the computer, Cambridge is a fundamentally important place.  My objective, at that moment, was to get to Lincoln and leave Cambridge for another day.

The M11 soon became the A1 and within hardly any time at all, I discovered the exit I was looking for: Stamford.  A gentle ride through this pretty market town soon gave way to quieter roads, the kinds of roads that motorcyclists love; roads that are gently undulating and sweep from left to right.  Not only were they undulating, they were also fairly empty, there was no rain and very little wind: perfect.  Small towns and villages came and went, my destination becoming ever nearer.  All in all, the journey took about five hours, including two stops (one for fuel, another for coffee).

After two days of catching up with my parents, the time had come; I was going to take a short trip to explore some places I had read about, had ridden past and had never properly seen.  I donned my protective 'gubbins' and set off across the fens.  There is this glorious road between the village where I was staying and Lincoln.  It's dead straight, with wide distant fields on either side - you can see for miles.

My objective was to get to the heart of the city and park in a place where had seen bikers parking.  When I got to the city, I blundered my way through the one way system twice before I bagged a space, vacated by a departing Ducati.  My first objective was to figure out where Silver Street was.  I looked up a nearby street.  I had accidentally (or unconsciously) parked on Silver Street!  My next objective was to find number 34, the birth place of George Boole (1815-1864).

If you're a computer scientist or just a casual user of a spreadsheet or database you would have quite likely stumbled across his name.  The terms 'boolean expressions' or 'boolean conditions' have been, quite obviously, derived from his name (in the same way that the word algorithm can be traced back to the name of a Persian mathematician).  I have to admit that I've only just started to scratch the surface on the history of Boole.  George's father, John, was cobbler.  Apparently was somewhat distracted by other pursuits, particularly mathematics and science.

I walked the entire length of Silver Street to try to find number thirty-four but quickly became confused; the street numbers were few and far between.  There seemed to be no discernible pattern.  I adopted the age old tactic of 'appearing to be confused' and barrelled into the entrance of an estate agent.  'Excuse me, mate, is this number thirty-four?' I asked a smart looking man who was wearing a shirt and sporting a tie.  'This is number thirty-two... I have no idea where number thirty-four is, might be next door?'  I offered a smiley thank you and returned to the street.

'Hello... erm, is this number thirty-four?', 'Yes!' came the delighted reply from a nice lady who was sat at a computer.  Number thirty-four, like number thirty-two was an estate agency.  'I've found it!' I exclaimed.  I took a step back and cast my eyes around the office-like interior, as if I was looking for some kind of shrine to the great man.  Instead, I saw a photocopier.

The nice lady was bewildered.  I explained that where she worked just happened to be the birthplace of a famous mathematician (which appeared to bewilder her even more).  I was tempted to explain my enthusiasm by started to talk about the importance of Boole and the history of the computer but I felt that it was neither the time nor the place since I obviously wasn't interested in buying a house.  Realising that my first quest was coming to an end, I began to feel that I was making a bit of a nuisance of myself.  Before I went, I asked for their business card (to gain proof that their estate agency really was number thirty-four).  Sure enough, I had found number thirty four Silver Street.

Boole invented something called Boolean Algebra and I know his work in terms of Boolean Logic and studied it college during my vocational course in computing.  He proposed a form of algebra that works with two states: one or zero, or true or false.  The reason why Boole's work became so important was that computers represent everything using numbers which are made of these two states  Sound, music, images, video, computer software, documents, instructions to turn on burglar alarms, pretty much anything you can imagine can ultimately, represented using just 'on' and 'off'.  Strings of these states form numbers: the bigger the number of 'bits' (which are, in essence, Boolean on-off states) the more numbers that can be stored and moved around in a computer.

But why use those two states?  The answer is pretty simple: it makes electronics simple.  By going with the simplest possible representation it's then possible to do ever increasingly complicated stuff with a high degree of reliability.  One day, I hope to write something about electronic machines that worked with the kinds of numbers that humans work with - but would require a much longer journey than the one I'm writing about.

I'm simplifying things terribly here (since I'm not a mathematician and I'm writing about subjects that are slightly outside of my area of expertise), but I think it's safe to say that Boole's work on logic is so fundamental that without it we wouldn't have computer processors or logic circuits.  Boole, ultimately, created the tools of thought that allowed us to work with logic states.  In software terms, an on-off state can be considered akin to an atom in the physical world.

Boole's birthplace wasn't the only place I wanted to visit.  After saying my goodbyes to the nice estate agent people, I had another quest: to go and visit the school that Boole founded.  I walked to the end of Silver Street, crossed a road, walked a bit, then got confused... and only then consulted my GPS enabled mobile phone.  Within minutes, I was walking up a steep flight of stairs towards Lincoln's medieval cathedral.  It stuck me that I had probably found a path that hadn't changed for a couple of hundred years; some of the steps had been visibly worn down over time.  Looking upwards, I could see the cathedral through a small archway in the distance. 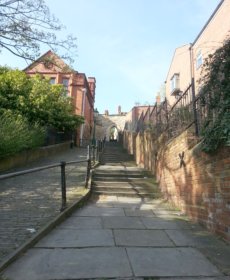 When I was at the top, standing in the shadow of the cathedral, I consulted my phone again and figured out where I needed to go.  I knew where I was.  I had ridden on it many times before on my bike training.  It's a road that runs from the bottom of the hill (where the industrial and retail part of the city), to the ancient part of the city.  The top bit can get a bit exciting, since it's quite a fast road and two lanes merge into one before taking a route past the cathedral.   Within moments, I had arrived at my second destination.  I peered through the railings at a lovely looking house and I soon found a plaque on the wall that indicated that I was in the right place.  Here's what it said: 'George Boole, father of modern algebra. Author of the laws of thought and first professor of mathematics at university college, Cork, was born in Lincoln and established an academy in this house c. 1840'.  Satisfied, I turned around and retraced my steps and returned to my bike.

Five days later it was time to return to London.  I set off ridiculously early, hoping to avoid as much traffic as I could.  The ride though Lincolnshire was beautiful.  There were these moments where you could see where dew had touched the undulating roads that I could see in the distance; roads that appeared as ribbons of silver.  I was touched by not only the physicality of negotiating them, but awestruck by the light and the experience that the roads were presenting me.  By the time I had got to London, everyone was fully awake and the motorways that took me back to South East London were pretty solid.

I've now got some more work to do to answer a number of different questions: what was the time in which Boole living was really like?  Who else did Boole know?  What kind of work did he do after he left Lincolnshire?  How exactly did he influence other mathematicians and has he made other contributions to mathematics (with a view to understanding its connection with computing), other than the ones that I've already touched on?  Time, of course, is the challenge: there are so many other questions out there that are interesting!

I've also got some plans for the next journey. I'm going to stick around in South East London for a bit and then cross the river for another Babbage related adventure.  I'm going to be spending quite a lot of time in London before venturing further afield.