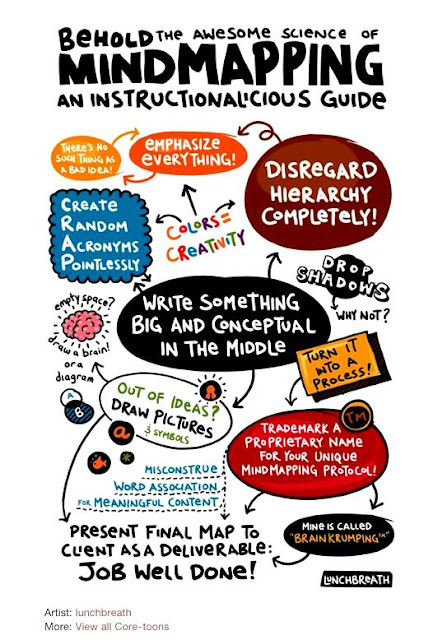 Mind maps can be such twaddle.

For a few days I taught Tony Burzan in Secondary Schools; the best mind map wasn't a mind map at all, it was a football field.

I was not invited to continue with my efforts to teach memory tricks and cheats after that my second only effort to occupy 40 Year 9s.

Another blog, another day ...

An eventful seven hours or so. Despite the need for an essay plan, bullet points or an ordered list. 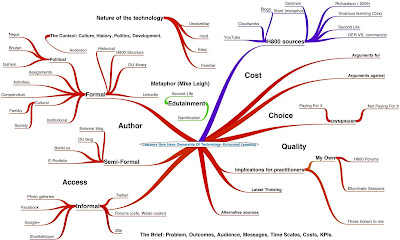 I tried to write a TMA from a mind map and got myself as ludicrously tied in knots as it is with unlinked threads and a failure to group the content; a Venn Diagram would have worked better. Which is a point as applicable to the software that creates these things, know your tools and choices and make them. Sometimes the old, simple ways work best. Essays and assignments, like a narrative, are linear. 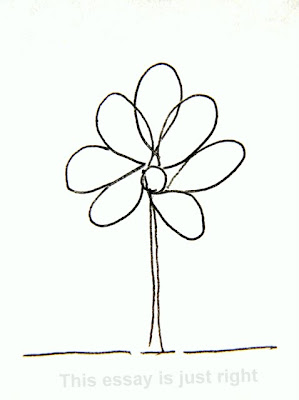 My A' level Geography teacher Mr D.Rhodes of the Newcastle R.G.S had the best approach. 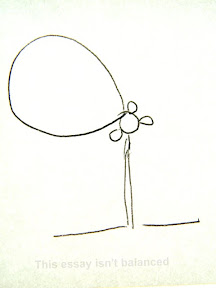 A shorthand doodle at the end of an essay would often feature such a flower with ONE huge leaf until I got the picture.

An essay plan or treatment, unlike a mind-map, requires effort, concentration and thought.

The journey I set out on to get to Oxford or Cambridge took two years.

Not getting along with Economics I switched to History after a term in the Lower Sixth. (Not getting on with Sedbergh School, Cumbria, I left

My essays, though long (always, my habit, then, as now - why say something in six words when eighteen will do?) Tell Proust to write in sentences of less than six words, in paragraphs that don't flow from one page to the next (ditto Henry Miller).

See how a stream of consciousness turns into a cascade?

My essays (I still have them. Sad. Very sad). Were on the whole terrible. A 'C' grade is typical, a 'D' not unknown. So what happened to get me to straight As, an Oxbridge exam and a place to study Modern History at Balliol College, Oxford?

I was bedding down. Putting things in a stack. And working my pile. Perhaps my history tutors detailed notes and bullet points fed on my poor essays? Perhaps the seeds that took root were carefully tendered?

Repeated testing (my self) and learning how to retain then regurgitate great long lists of pertinent facts helped.

Having an essay style I could visualise courtesy of my Geography Teacher helped. (Think of a flower with six or so petals. Each petal is a theme. The stamen is the essay title, the step the introduction and conclusion).

Writing essays over and over again helped. Eventually I got the idea.

Try doing this for an Assignment. You can't. Yet this process, that took 24+ months to complete can be achieved over a few weeks. Perhaps a blank sheet of paper and exam conditions would be one way of treating it, instead I've coming to think of these as an 'open book' assessment. There is a deadline, and a time limit, though you're going to get far longer than the 45 minutes per essay (or was it 23 minutes) while sitting an exam.

Personally, I have to get my head to the stage where I've done the e, d, c, and b grade stuff. When I've had a chance to sieve and grade and filter and shake ... until, perhaps, I reach the stage where if called to do so I could sit this as an exam - or at least take it as a viva.

Not a convert to online learning as an exclusive platform though.

Passion for your tutor, your fellow students ... as well as the subject, is better catered for in the flesh.

The way ahead is for 'traditional' universities to buy big time into blended learning, double their intake and have a single year group rotating in and out during a SIX term year (three on campus, three on holiday or working online.)

P.S. Did I mention teachers?

Have a very good teacher, it helps. The Royal Grammar School, Newcastle where I transferred to take A' Levels delivers.

Our Geography teacher had most of us (all ?) achieve A Grades at A Level. When it came to writing essays his advice was simple and he drew a flower on the board with six petals.

The stem was both the introduction and conclusion, the centre of flower was the essay title. Six petals, perhaps eight would do it. Each would be a point, well made, with quotes/references.

Often he'd summarise his thoughts on a boy's essay by drawing a dishevelled weed ... or more simply a three petalled plant with one huge, deformed petal ... and so on.

I was never one for the perfect plant. Often I'd be the one with twelve petals, some tiny some so massive they took on the entire board. One essay I remember submitting filled an entire exercise book (I still have it, sad, I know. It was Geography, meteorology, he taught as to undergraduate level). I regress (and digress).

After two years we sat exams. By then by editing down and picking out what I felt mattered I went into the exam well prepared, armed to the teeth. I could easily give up ten minutes of the 45 mins to write on a topic to planning, the six or so main points, the pulling from my head a mnemonic that would deliver a dozen or twenty or more facts. And then I wrote. This worked.

Course work would have suffocated me. I lack that consistency and self-discipline, or more likely, I drain so much energy intermittently that I just have to 'chill' from time to time. I'm not one for drawing early conclusions, nor am I one for regurgitating what is wanted from me because of what specifically I have been asked to read - I will always look beyond the references.

In particular, I would prefer to sit down to write naked ... jsut me and the keyboard, no notes. For the information to have gathered in the rigth spot in my head I need to have worked with the material, to have discussed and debated it, to got it wrong and been corrected, to have asked questions, and to have figured it out. I have to believe it.

Working in a Web Agency when first doing an OU course on distance learning the topics were of interest every day to colleagues so it was like being on a campus, or certainly in a faculty. And as we believed or thought that the aim of a university degree or studying was to get a job there was a degree of arrogance - we had jobs. We were in it, doing it. We had to know best, or certainly quite well, otherwise why would companies & government pays us to do our thing?

I ramble. Or reflect. Whether I can reflect my way into some higher level of sublime understanding though is quite another matter. A decade ago blogging obsessively there were a group of us who read and responded to everything we wrote. Doing this I feel I am writing with a fountain pen on the ceiling of a catacomb.