The idea is that you leave 5 hours between meals during the day and 12 hours overnight. I just forget to have my lunch. I was 'pooliside' half an hour before the National Squad turned up. Perhaps I should have waited until they had arrived in order to run through some tips on nutrition.

This is  no longer a diet: I lost 6 kg from 1st to 31st August eating like this - low to no carbs, no sugar at all, and plenty of veggies.

Changing behaviour takes a great deal of effort by someone.

In this instance it was my wife and a year of reading up on gut microbes. Then she has taken time off work and decided that I would be her 'proof of the pudding' to use the wrong expression. I have cheated now and again: a few bears, packets of crisps.

And then has been running. Supposedly a couch to 5k, but getting a run in during the working week is proving difficult.

Learn from a Master of their subject from the youngest possible age. Picasso studied under his father, a university art teacher, from a young age - from the moment he could pick up a pencil, crayon or paint brush I imagine. His talent is extraordinary and takes off someone between the age of 10 and 14 by which time Picasso could produce works such as this:

Having visited the museum before my interest this time was drawn towards his life drawing studies - such a vital skill. Seeing his anatomical drawings as well as life model drawings brings it home. He had the skills. He did the preparation work. He knew what he was doing - even if for now he is under the direct guidance of his father.

This all began in May 2016 so I've been tinkering around with Veganism for a while. My daughter would argue that I am 'Plant Based' ... and lack the willpower or evangelism to be truly Vegan. I wear a leather belt and have sheepskin slippers on as I write.

Once in a blue moon, or to be more exact, once in a full moon I may succumb to something with egg, or even ham in it. This is invariably when I am away from home. In the A&E of the regional hospital for the best part of 5 hours I went on a quest for a Vegan sandwich and had to make do with the 'Vegetarian' Salmon and soft cheese sandwich.

Why go vegan? Take you pick:

1) It tastes fantastic: fresh pesto and pasta, Siam soup, dips and chutneys, risottos and a wide range of burgers and falafels and of course salads and fruit raw.

2) It's cheaper. This lot cost under £60. Meat, fish, milk and cheese would push this up considerably.

3) It's healthier. We've checked and between the variety of nuts and range of foods we lack no vitamins. Our gut isn't suited to take quantities milk we have become used to. It helps to cut out sugar too. Vegan's can be unhealthy and overweight by living on fizzy drinks and crisps.

4) It's ethical. If you think this way. I didn't for 18 months. 'Nothing with a face on it' has been raised and killed.

5) It'll feed the planet. It will feed more people and reduce degredation of the natural environment.

7) It's less messy in the kitchen. No fat and grease on pans, kitchen surfaces or blocking the drain and sink.

8) Less waste. Waste can be composted.

9) Less packaging. Fruit and veg can be bought lose and put in paper bags.

10) Grow your own. For taste and convenience. You can grow a good deal of it yourself.

13) Be part of the movement. The 'early adopters' got there first so taking this on now you become part of the peak uptake.

Some essentials for the Vegan Kitchen:

A cookbook that has recipes with cultural relevance i.e. typically every day foods from India, Asia, Africa and some Mediterranean.

Spice Grinder. Great for nuts, pesto and chuntney blending too. 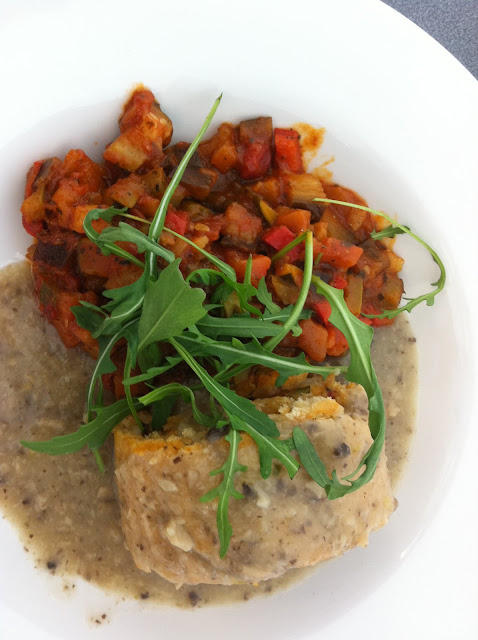 I forgot to mention this one but two months ago I was given nasty cholesterol score and a dear friend and neutrionist rather than see me on satins gave me a comprehensive health review, some don'ts and does (recipes) and some supplements.

Six weeks on and my pot belly has gone, my poo still floats and I fart a lot and my cooking range has been extended.

I was also supposed to give up alcohol and coffee; whilst the former is down to close to zero I drink even more coffee, though it is black. My vegetarian daughter is delighted and our shopping bill is down 30%.

Porridge with soya milk every breakfast, fresh pesto and pasta at lunch, home made soup in the evening sometimes turned into a casserole or with brown rice.

And as well as coaching the local swim club I now swim with it too; the extraordinary insight at being the swimmer being coached for the first time in 32 years a bonus. So a healthy mind and a healthy body, both thanks to The OU as it was while living and working up at Milton Keynes that all of this happened.

And I have an exam tomorrow. Just surving this far through the module has been an achievement as life around it has been somewhat difficult.