The content here, how produced, presented and managed by FutureLearn is the perfect catalyst for a diversity of contributors. As interested in the strengths and weaknesses of the MOOC (Massive Open Online Course) as a platform, this from FutureLearn is showing the value of many connected minds coming together and feeding of each other. It strikes me that as people group around a line of thought, with the educators and contributors, the kernel of a tutorial forms: ideas are offered, shared, adjusted, politely corrected, fed, developed and consolidated.

It intrigues me to understand what the formula for success is here: the simplicity and intuitive nature of the FutureLearn platform; a clarity that in multi-media terms reminds me of those Dorling-Kindersley books; the quality of the ideas professionally, creatively and unpretentiously presented ... and a topic that has caught the Zeitgeist of the centenary commemorations of the First World War and its consequences rather than the chronology of the battles and the minutiae of military tactics.

For someone who has studied seven of the eight or nine Master of Arts: Open and Distance Education (MA ODE) modules my continued interest in e-learning is diverse; it includes however not the Massive Open Online Course (MOOC) per se, but rather ways to escape the technology in order to recreate or enable the qualities that come from the 'Oxbridge Tutorial'. 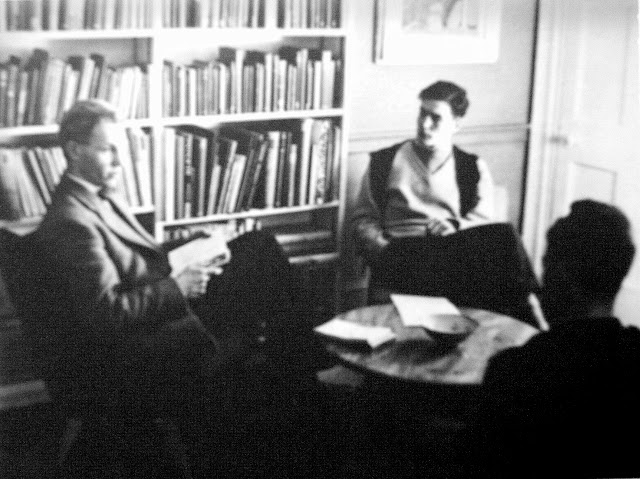 I am specific here because these tutorials are not seminars, webinars or lectures, an 'Oxbridge Tutorial' is typically either one-to-one, the 'great mind', the 'subject matter expert' and his or her student or 'acolyte' or one to two or three. The standard pattern of these is for the students deliver a short essay, around 2000 words, on a single topic from a reading list. In theory all the participants write an essay but only one reads his or her essay out that everyone then discusses. The tutorial lasts an hour. You have one a week ... per topic. Some tutors, the natural and committed educators extend these tutorials into informal settings, picking up the conversation at meals and in other settings.

Fig.4. Learning from others: an exchange of ideas

You cannot simply transpose this kind of 'tutorial' to the Internet in the commercial sense as the educator hasn't the time to give, repeatedly, an hour of time to just one, or two or three students. This is not the model that can support the educational desires of the 5 million in the world who crave a university place. Certainly, these students need peace, a roof over their heads, food and political stability and of course the infrastructure and means to own and operate a device that can get them online ... a tall enough order, but smart phones could be as cheap as £10 within ten years ... but then, it will be through the kind of connectedness between students, moderated and catalysed by the experts that this 'tutor-like' learning experience can be created.

I see it in this MOOC. I have seen it with a variety of activities in OU modules.

Fig.5. My takes on 'Connectivism' as a burgeoning theory of learning

'Connectedness' is a learning theory developed and espoused by George Siemens.

H817open MOOCs to get lost

A terrific webinar hosted by Martin Weller with George Seimens speaking. Link to the recorded event and my notes to follow.

I took away some key reasons why OER has a future:

1) Hype between terrifying and absurd.

2) State reduction in funding will see a private sector rise.

3) Increase in rest of world's desire for HE OER

7) Credit and recognition for students who go to the trouble to gain the competencies.

‘MOOCs indicate that we are seeing a complexification of wishes and needs’ - so we need a multispectrum view of what universities do in society. George Seimens, (18:51 25th March 2013).