Though hollowed out by 'stage fright' for most of the day I last night deliverd a formal, observed 90 minute online class to a group of students. To get my head in order I successfully used the UCL Learning Designer; I have been learning how to use this on the UCL FutureLearn Massive Open Online Course which has been running for the last two weeks and end this week.

This is one the Learning Designs I created > Digital Literacy

The session was recorded. Though I'll need some breathing space before I revisit it. I will also have formal feedback from the person who observed.

I have to wonder why I put myself through this kind of thing! I guess I wanted to wake up my sleepy soul and have succceeded in doing so. 15 minute before I would have (I had the line in my head) "Eat Shit". This is somewhat exaggerated - I would have made excuses. I would have preferred to have been going on stage to deliver Hamlet in a thong.

But I settled in quickly. I am not delivering a TED lecture.

The pacing was about right. Introduce this, show about of that, seeking their point of view. And I purposively kept the Tec low key (despite the subject). This is not the place for me to show off my skills - it is all about them.

My insight into teaching and learning could not be greater. As I realised a decade ago, even 20 years ago when I first did an OU Module on Open and Distance Learning - the theory has to complement practice, not be something that is done in isolation. Who does? How could I think I can study education without doing it myself? You can't learnt to dance only by reading books - you can only acquire an appreciation. But you can be an art critic without being able to paint?

I've attached my rationale and a 'running order' with timings for the lesson I delivered. The timings were spot on - more or less. We took a 10 minute break an hour in which I readily accommodate and just added 10 minutes to the plan and continued accordingly.

Diagrams and Maps: Peninsula and Isthmus

I loved to visualise things, to make charts, and maps. For much of my professional career I have defined myself as a ‘visualiser’. I take the complex and make it appear simple through visualisation: photography, illustration, video …

Pain. Not recommended. Or was it? In the junior school, age 5 or 6 at the very most, we had a morning in the ‘senior’ school at Ascham House Prep School, Gosforth. We had a class, with maps, and Miss Short taught the words ‘Peninsula’ and ‘Isthmus’. I can see those huge maps held on a long wooden pool that were hung on the wall and opened to reveal the ‘Peninsula’.

At the end of the class, and on the way out before returning down the road to the ‘junior school’ my older brother (age 7 or 8) entered and I gave him a hug. I got a thick ear from Miss Short for stepping out of line. I wonder if I only recall the meaning of Peninsula and that map because of the thick ear I received … or was it because of my boyish wonder at the map? I think it must have been the map - being shown something I had never seen before, and have it explained. Maybe because it gave a description to the ‘Point’ at Beadnell where we spent our holidays. Beadnell Point is a peninsula. At least on the scale of my world, which was the short walk from our cottage to either the rock or sandy beaches. When the tide went out, some of the rock promentories from my bedroom window created an isthmus I could cross. My adventures could now be mapped and shared.

Give me some skin ! A Lesson in Cool

I use ‘they’ to avoid identifying the gender of the teacher or students.

The teacher was as cool as they come. They could not be flustered. Old school I would have pulled a tray out for mobile phones (or the paper bin) and sent at least one person out of the class. That is not the thing to do. Some of the students I learn later are SEND or EHC.

The purpose of the class was to run through some definitions, like those above, on a template where the words have been left out. Each student had a paper copy to complete. It transpires that one student had done a different course and covered this the year before and could rattle through everything like an undergraduate in medical school. There was one student who very clumsily kept their phone on, just under the desk, as they read and replied to text messages. Intermittently they would interrupt the class with a complaint, or fasile remark. Somehow, I still can’t fathom how, by the end of the class this student had jotted down a least a few of the answers - albeit once someone had given the answer.

As they were a close knit social group having them work in twos or threes worked well to get everyone working together. One group may have had to be a four, as one person didn’t want to be left out, or with someone they didn’t get on with. Understanding and going with the social dynamic was crucial.

I liken the atmosphere eventually to being more like a Scout Leader around a campfire than a teacher at the end of the desk.

Far from seeing how digital could contribute here > we had a 3D human body with 3D goggles in mind I rather thought a real 3D model made in Props by the Theatre Students would have the most impact. A giant finger like a large log in the middle of this virtual fire in the centre of the class.  Of course, medical students do get the real thing. That must be impactful. The very thought of it makes my brain prickle. The multi-sensory and emotional experience of cutting into a cadavre to look at the layers of the skin.

NOTE TO SELF: There is a template for more formal evaluations. I will use this, but any posts will be PRIVATE. 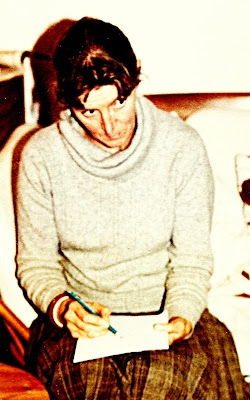 Imagine taking a desk and chair and sitting down in the concourse of Liverpool Station with a large computer screen. You are researching and writing up an assignment. People are going to look over your shoulder - some will contribute.

What makes this more or less likely to happen?

I used to sit and draw. This attracted attention. Sometimes I would draw people who sat for me - I was 'getting my hand in' for an A Level in art.

If my mother, an art teacher, were around then she would offer some gentle suggestions, sometimes taking out a sheet of paper to show me how.

Would you like someone to look over your shoulder?

With family around this is inevitable, from the indulgent love of a grandparent and the snidde teasing (potentially) from a sibling.