An opportunity arose to work for The OU again so I applied; let's see what happens. Maybe departing after just one year the first time round was a mistake that I can never put right - but that was then, and now is now. The kids have left school, gone through university and settled down and 'we' are free to move ... within reason. We'll see. Meanwhile, the two big events of this last week have been trips to Rodmell Food Forest and to Brighton Open Art Houses 2022.

The Rodmell Food Forest was an eye-opener. I garden on chalk so know how tough it is to develop a sound soil. It has taken me over 12 years to grow substantial shrubs and hedging through total lawn destruction, mulching with kitchen waste and all cuttings, and while there was lawn to nibble my secret weapon - guinea-pigs. (I'm told a goat is handy at the job too. Up in Cumbria we used a small herd of Vietnamese pot-bellied pigs to root up the foot-trodden turf).

I know now to mulch intensively, keyhole plant, collect rainwater, encourage birds and other kritters to look after the garden for me. We may stop short of having a composting toilet to collect dry human waste - though the head garden Marc Stenham recommended it - that and comfrey leaves.

We left Brighton Open Art Houses late - again. We always mean to make an early start and be picking off a last trail or returning to a favourite one by the end of the month. Here we are trying to cover too much ground on the last afternoon and it went slightly pear-shaped, largely because we also thought we could ditch the car and do it on foot. We spent most of the allotted 4 hours treading the pavements of Brighton seafront; there were some gems though, I loved a return visit to Sussex County Arts Club where I took up life drawing in 2016 and to the work of figurate fine artist Patsy McArthur. I aspire to paint large, on a big canvas or mural in scale.

Registered with the University of Brighton

Yet again a PhD is in my sights for 2022. I have contacts at the University of Sussex (indeed it has been recommended), but what about The Open University? It would have to be 'at a distance' - Milton Keynes and I do not get on from my efforts 2010/2011. 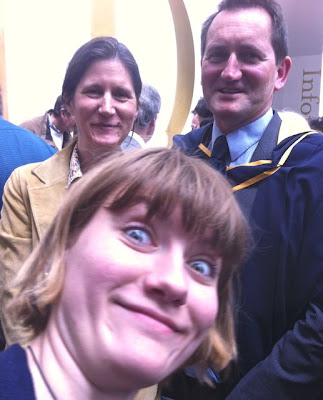 I'd just paid £50 to hire a gown so I thought I'd save the £65 to £195 on the 'Official Graduation Photo'. This is the one that gets put in a frame with my certificate then. A positve, even emotional experience and a reminder of what the OU stands for and what it means to all of us to do this journey. This should be 2003, but never mind ... got there in the end!

Applications go out in various directions for funded doctoral research ... and one curiosity, an MA in History at Birmingham on 'The Great War' to try and finish a project I started over 22 years ago on the Machine Gun Corps.

I thanked my 14 year old son for coming along as I drove him around to a friend's house and he said, 'No, thank you for inviting me'.

Back in 'civvy street' having left the OU after a year in Milton Keynes I got chatting with someone now at the University of Brighton who had 20 years at th OU; he laughed at the degree of truth in my calling it (with love) as 'the priesthood' not least because onarrival for interviews in February 2011 I felt as if I was visiting the Vatican.

There were five others from the University of brighton st this evening event at The Skiff in Brighton's ubber trendy North Lanes.

Phil Jones the MD of Wired Sussex did the introductions.

This was to be a shared conversation on how Brighton and Sussex Universities could work with the 'wired' Brighton sector.

I was lucky to spend a goid 15 minutes with him before the presentation and heard some fascinating ideas on how algorithms are used to look at vast quantities of email and social media conversations.

Miltos is from the University of Grenwich where he developed an interest in AI, essentially doing clever things with v. large amounts of data.

He said that Universities tend to thrive in times of recession; I should have asked him why?

There is a desire to hook up with alumni long term, especially as so many choose to stay in the area. I liked what one contributor described as 'fine-grained collisions', sandwhich courses and internships for example where undergraduates with desirable niche skills cab put them to good use' in industry'.

Miltos made the point that 'What we are calling clouds a few years ago used to be mainframes'.

Another contibutor with a music degree said that this taught him the value of collaboration, a skill too many graduates lack. I wonder if proof of collaborating online couldn't be offered in evidence?

I plan to attend Wrired Sussex events in Brighton regularly, also IVCA meetings in London; networking online isn't enough, it is relationships made face to face that lead to something. So I've rejoined the Institue of Swimming and in constract, the Royal Academy.

(I have always thought the the sides of swimming pools would make a fantastic gallery for art; has anyone to your knowledge done this outside the private home of the very wealthy?)

Evenings & weekends I'm a swim coach. Chatting to a parent last night about her son's crisis over course work and exams for GCSEs I mentioned the OU course I was doing. Before I know it I've got an introduction to the person responsible for training at a large county council. I was also able to get some insights into how 'e.learning' has gone. The greatest memory was of too many poor links in the early days so that anyone on a course constantly found they were being linked to the wrong place and coming to a dead end. After a few years of doing it all in-house it is now outsourced.

A start has been made.

Attending a Careers Fair in Brighton put on by Wired Sussex delivered three companies that specialise in e.learning. If I can convince them I can be introduced to their clients I may have an in here too. And once again, old fashioned 'face-to-face' interactions is/was the key. As salespeople know it is harder to turn someone down in the flesh and in this context they can see that I am a well-meaning, well-turned out, experienced & savvy bloke.