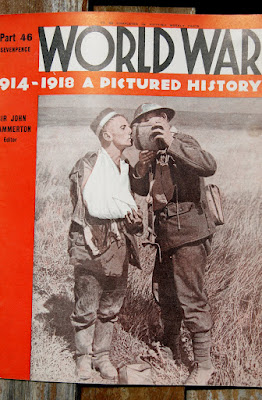 I am reading a 52 piece part work 'World War' edited by Sir John Hammerton and published between 1936 and 1937 with occasional contributions from H G Wells, this alongside various staple and new reads on World War One.

As a piece of learning design what could be simpler? A magazine delivered each week, chapters deliberately left unfinished between parts, photos offering points of interest explained and developed in later issues. 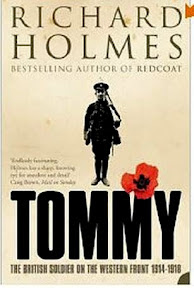 Perspectives shift of course, just as they had a view on the Napoleonic Wars. However, in many cases 1914 was not dissimilar to a battle of 1814, or 1870.

'Read in a period until you hear its people speak' E H Carr.

I play this trick of falling asleep with an event in mind and courtesy of the painkillers I am currently taking I enter a vivid dream world much of which I can recall.

The problem with WW1 is the clammer of voices, not just what you can read, but the voices you can listen to on DVD or podcasts, indeed I have several hours of my own grandfather in a County Durham accent that those not familiar with the North East would call Geordie and find, at times, incomprehensible.

How does an historian deal with history when the record is everything? Had a soldier gone into battle in 1914 with a video headset what would we do today with years of material? My grandfather, for example, had no leave from the day he left England in early 1916 to his transfer to the Royal Flying Corps at the very end of 1917.

Would the reality be a huge amount of sitting around dealing with the boredom, discomfort and fear? 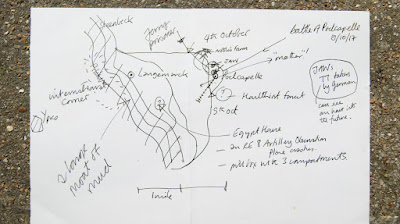 This is a map I drew with my grandfather in his 97th year. This and his visit to the trenches the previous year would allow me to retrace his steps, almost by the day between September and end of December 1917.

A researcher from UCL quizzed me on this some years ago and I had to conclude that for me it was less an obsession with WW1, but rather reminding me of a dearly loved grandparent. I can't see drawing up maps of my grandmother's trips into Newcastle on the tram having the same appeal (or historical record or value).

Gradually online I am connecting with grandchildren of veterans and others interested in WW1 so that there is a component of 'Social Learn' between blogs and Facebook. All the books I read I share on Twitter, which may help promote the book, but is also attracting many like-minds.

At what point do I become so well informed that I could sit an exam without sitting for the qualification?

Can I short-circuit the steps to an MA in History? There are two parts to the degree, but it is the second part, the ellective, that takes me into WW1 territory.

Then you settle into married life and children and, as I now do, I celebrate my 18th Wedding anniversary, my younger sister's 25th and the 50th anniversary of my in-laws.

I read about people who plan to digitise their life. The ephemera I have includes the diaries and a trunk of handwritten letters; rememeber them? And letters this boy sent to his Mum from about the age of 8.

Wherein lies the value of it? A useful habit, as it turns out, but do we expect our want a new generation to store every text, every message, every Facebook entry. Are these not stored whether they like it or not ... and potentially shared. Whose business should it be, when and if to 'disclose' or 'expose' a life. It can be of value, but it can also be harmful.

On the reverse side of this card is a note to my fiance, written on the 17th February 1992. We'd been engaged for 8 months, were living apart and would be together that summer and remain together now.

The value of reflection here, is a reminder of these sentiments. The value of any record, any stirred memory, can be to reinforce it, to be cherished, forgotten or dealt with. But if you haven't taken notes, you rely on the vagaries of your mind. So perhaps a massively scaled down version of digitising everything you do may have value, like a broach you press on occassion 'for the record.

All of this STILL coming from a single Opinion piece in the New Scientist (23 December to 1 Jan) about someone digitising every moment of their existence.

This is how the 'professional' student or corporate blog should look ... not social networking, no flirting, no personal stuff, just the business - something to chew on.

E-diary, e-reader, e-by god what next?

I can think of little else, how pointless it would be to record all that you do and see and hear all day. And then, taking a swimming group this morning, armed with a digital recorder and headset I wondered if recording my instructions and tips to the swimmers over 2 hours +, if done every week for a few months, at least following through all the strokes, progressions and skills, if this could become the basis of a podcast series reduced to 4-6 mins each? The kids would initially say something about the headset and mouthpiece ... and probably offer some commentary, most of which I could now lift out having mastered WavePad.