Courtesy of browsing through my own and two other tutor groups, and looking at the lists produced by a couple of student friends who did H810 in 2010 and 2011 I've developed this 'long list' of 13 issues. I wanted to eliminate concepts and models, which were distracting me. I struggled repeatedly to get these in any order until I did two things:

1) put the issues into my context, knowing the set up and people, what could or would result in something happening for the better in relation to delivering any learning, let alone accessible e-learning for those for whom there are barriers from a variety of known impairments or disabilities

2) create a table of all 13 issues and compare one to the other as less or more important IN MY CONTEXT.

My chosen context is the coaching and teaching of swimming in the UK - with e-learning available for teachers, coaches, club officials, parents and athletes.

I particularly want to thank Simon Carrie who has my point 3 as his first issue - I hadn't given it a moment's thought but in my context, and no doubt in the context of most of us, it cearly is very important - people and tools cost time and money.

1 Objecti(ive) - The importance of and scoping of the objective as means to an outcome
2 Subject - Significance or role of the subject (student/lecturer) User Centred Design. Involve users in the design.
3 Incentives - Incentives to invest
4 Universal Design - Universal Design/Equity
5= Novice 2 Expert - The role of the novice to learn, participate and develop expertise.
5= Framework for change - A framework for change - An Activity Systems as a model for analysis and action
7 Tools - Role of tools - assistive, web pages, equipment and 'design for all'.
8 Contradictions - Contradictions , conflicts of problems with the actions between components of a recognised activity system
9= Rules - The role of rules (legalese and guidelines) - informal and formal
9= History - What the history of such efforts says about what should be done next and what can be achieved in the future.
11= Division of labour - Division of labour - who is responsible, who is the broker?
11= Community - The community as a ‘community of practices’ or a constellation of connections that engage and participate.
13 Game-like - Game-like play between institutions

What are your thoughts? In your context? How would you prioritise or word these issues? Are there more still (probably).

The two other contexts that interest me are from the point of view of an e-learning agency and from a client point of view.

For the latter - Object(ive) as everyone works to the brief once this is written with clear objectives, universal design for those for whom design as an expressions of creativity and problem solving is important. Tools as agencies are expected to come up with a 'clever' technical response. Framework for change - as in a consultancy capacity the agency will be expected to offer some actionable plan.

For the former - Incentives (as performance Improvement), Rules (legal and mission compliance) and division of labour (who does what) are likely to be significant.

Which are your Top Ten e-learnering tools?

Clicking through the Top 100 e-learning tools of 2010 it surprises me how many I'm familiar with, and a few on which I am dependent.

Looking at this Top 10 we have all surely used these?

Having much experience of most of these takes the title 'Jack of all trades' to a new level, but is this not expected, based on every tool having to meet a need and be easy to use, you just give it a go, running with it works for you, ditching it if it doesn't?

eLP - letters after your name?

This looks good on a flipchart, I even took photos of it. I wish it were more dynamic, on the paper version the reverse side of each catergory has a set of industry related quotes.

How do I create a classic Venn Diagram with a piece of software?

Is there the means to play with diagrams like this collaboratively in a wiki or Google Docs?

I'll produce a reverse image of this with the references.

I also realise that I have about thirty items that would appear where professional, 'e-' and 'learning' cross. Sometimes a handwritten essay with a hand-drawn diagram is so much easier to produce and correct

How about handwritten essay produced with a stylus on a Wacom board?

Spent the morning walking along Cuckmere River to the Channel where it became remarkably mild in the sun. Chewing over reasons why efforts to raise finances to produce high-end, TV docu-drama programmes linked to interactive 'edutainment' never got off the ground in 2001, despite fullsome praise from the likes of a founding director of Cisco (John Cage) at NABS where he had the keynote speech and we were presenting.

We wanted to wow viewers and spend a great deal and thought there was a way for this to make money. The broadcasters, stallwart supporters of Atlantic Productons with whom were were developing product, were at this very time pulling away from the websites as pits of financial loss. Commercialisation is everything.

It is therefore timely that there was an hour long discussion this morning on the rise of Thomas Edison, the inventor of the 'Innovations Lab.' I was in one once myself, the BT Think Tank. If anyone will have me I'll join a new think tank, if not, I'll form my own.

This is how to educate 50% of UK school-leavers. They leave school, but they don't leave home. They take their degree through the OU or some similar while working.

A new generation with a new set of concerns and motivations.

Just when we thought we could rest comfortably at night, I would come across a compilation of what a group of some 600 e-learners consider to be the current 'Top 100 e-learning tools.'

Like all lists it's reassuring to see ones you use and like, of interest to find something new, worrying if something you swear by isn't on the list at all. 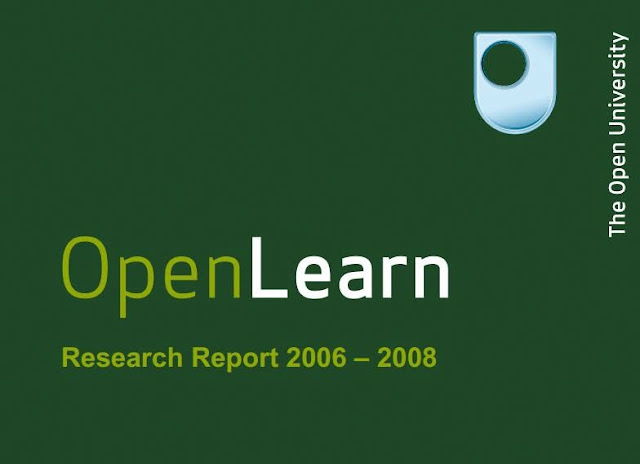 This report is highly worthwhile -  an insightful guide to distance and online learning, through e-learning to current best practice and what we might come to expect.

Whatever the web may afford in relation to social networking, do distance learners want this level of interaction ?

Despite what the web offers in terms of content, would students be better off sticking with what is offered to them instead of getting distracted?

Probably. It’s less distracting, and no doubt of a higher quality and relevance. (Makes marking easier too as their is some chance your tutor has read it too).

This 63 page report is a gem and offers some insights across distance and e-learning from some of the leading OU practioners and thinkers.

The value of Open Learning

Free access to re-mixed OU courses is not only providing tens of thousands of users with a valuable resource, and step into a formal OU course, but is a lab for research, experimentation and design in the Web 2.0 World.

Open Research Online offers an extraordinarily insightful chronology and pedagogical reasoning for 'free' online learning which indicates the degree of shift, or substantial fraying of the edges of traditional approaches through a wide variety of tools and their multiple affordances that make learning student-centred, and hopefully engaging, and effective.

Distance Learning no longer needs to be such a solitary affair

'Online learning is often undertaken by an individual in their home or place of work in physical isolation from others studying the same material. Social software that allows these individuals to come together with other learners can play a vital role towards the achievement of the desired learning outcomes.' (p. 25 McAndrew et al, 2009)

Ditch (or repurpose/re-invent, remix text in favour of hat" Podcasts and YouTube?

'Materials on the web should (ideally in many people's views) utilise the capabilities of the web and how people use it. Thus it was (and still is) believed there should be fewer words, more graphics and much more dynamism or interactivity in a highly structured, more resource-based style of pedagogy when authoring courses for the web.' (p. 29 McAndrew et al, 2009)

Content over interaction ... so much for the rise of 'Educational Social Networking.'

'A large choice of content is considered the most important feature of Open Learn and that interacting with other learners is low in this list.' (p. 39 McAndrew et al, 2009)

How easily are you distracted by what the web offers, pushes and invites?

'The Internet is not necessarily Utopian and the support that formal structures offer should not be dismissed too easily. A competition for attention means that users can be distracted from their intended purpose and that chance encounters with information may be an unsatisfactory solution in comparison with targeted offerings that constrain and direct interests towards specific goals.' (p. 4 McAndrew et al, 2009)